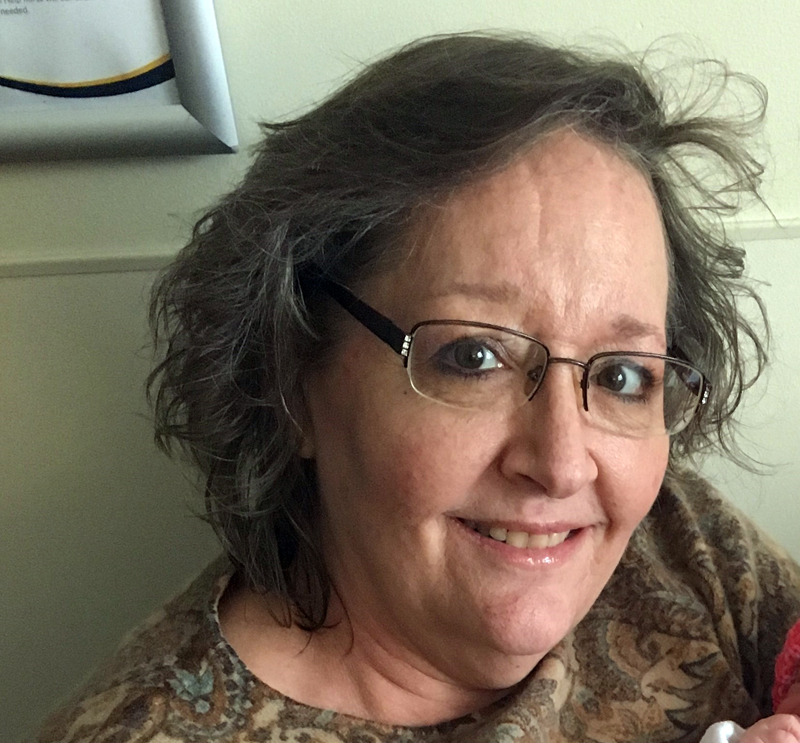 Maria Elaine DePatsy, 61, of Waldoboro, passed away peacefully surrounded by family on May 27, 2022. Born March 1, 1961, in Damariscotta, she was the daughter of Alice Osier DePatsy, and the late Nicholas DePatsy Jr., of Waldoboro.

From a young age, Maria had a love for animals including horses, dogs and her daddy’s ducks. She learned to ride horses at a young age and was quite fond of her beloved Coquette! She grew up in the United Methodist Church of Waldoboro where she attended often with her mom and contributed to Sunday school class.

Maria graduated from Medomak Valley High School in 1979. Those her knew her best may remember epic rides to school in her Chevy Impala. In high school, you would find Maria shaking her pom-poms and doing splits as a cheerleader. She created many cheers and routines for her squad. As a fan, she would help cheer the 1977 Medomak Valley Panthers basketball team on to victory as the Class “B” State Champions!

Following high school, Maria attended the International Fine Arts College in Miami, Fla. She met some wonderful people there but returned to Maine to settle down in her hometown. Maria eventually landed herself in the hospitality business. Graciously serving her patrons and identified as one that would go the extra mile. She worked at the Cheechako in Damariscotta as well as the Black Pearl in Rockland. She was also a waitress at the Nobleboro Dinner House and The Backstreet Landing in Damariscotta.

Notably, Maria joined her late father’s business at DePatsy’s Lanes in Waldoboro and became the bartender at the adjacent Nick’s Lounge. When she was not behind the bar, you would find her on the lanes bowling candlepin, so the drinks would have to wait. She was an avid candlepin bowler and a staple on many yearly leagues. If you were part of the league, you might find your bowling improved greatly after a couple of Maria’s “world famous” mudslides! Maria also won a few distinctive honors for her bowling. In 1998, she was state champion for mixed doubles with Gary Winchenbach. She also won a state champion in the mother-daughter league with her own daughter.

Maria raised three wonderful children. She spent many countless days in the summer packing a cooler to head to the family camp or for adventures at the beach with her sister, children, and nephews. She would frequent Popham Beach and Reid State Park. Maria took solace in being by the water. She loved the ocean and took many boat rides with family and friends.

Later in life, she was blessed with her first grandbaby, a beautiful four-legged Pit bull named Shilah, who she spoiled endlessly. She would eventually also have two grandchildren to love on too. Maria had a passion for arts and crafts and creativity that she shared quite often with “her babies.” Maria also made countless earrings, necklaces and bracelets, and sold her goods at Delano Seafood in Waldoboro.

Maria was a “mom,” an “auntie,” and a “Nonnie,” (with a heart over the i of course), but she also went by “Mumma Maria,” by countless others. Maria took so many into her home, under her wing, gave loads of life advice, and words of strength to others. She would often say “give it to God,” and “you have to look for the signs.” She was also an amazing cook, which she got from her mom Alice. Maria would fill your belly with food, your heart with love and your soul with advice. She was famous for her meatballs and manicotti, her pizzelles and her creamy macaroni and cheese. She found strength in providing the comfort of food to others.

While her journey in this world was not always an easy one, Maria was passionate, faithful, courageous and at times quite fearless. We will all miss her infectious spirit, amazing advice, and beautiful smile. In her journal was her recipe for life, first have faith, add hope, give love, receive joy and get peace.

She is predeceased by her father, Nicholas DePatsy Jr., of Waldoboro; her Uncle John Osier and his wife, Marion, of Waldoboro; and her Aunt Norma Osier, of Bremen.

Arrangements and visiting hours will be provided through Hall Funeral Home in Waldoboro. Visiting hours are 5-7 p.m. on Saturday, June 11.

A celebration of life will be held at 1 p.m., Sunday, June 12 at the Broad Bay Congregational Church of Waldoboro. Reception details to follow.

Masks are required and purple ones will be available upon arrival to the church, in honor of Maria’s favorite color.