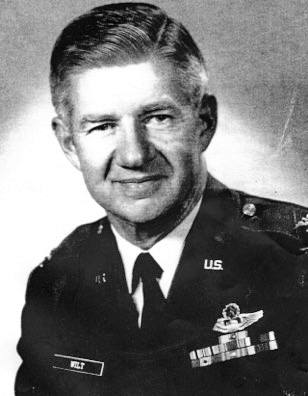 Mark Edward Wilt, who passed away Sept. 25, lived his life with enthusiasm. Born in Selinsgrove, Penn., in 1922, growing up there during the Depression couldn’t keep him from having a boyhood filled with adventure. There was fishing in the creek, using tar from the roads to caulk the boat, and the luxury of spending 15 cents on a Saturday movie followed by a hot dog.

Fascinated by airplanes, he always wanted to fly – a dream that was realized in WWII when he joined the Army Air Corps. He married his high school sweetheart, Rosie, in 1942 in the chapel of the Forest Lawn Cemetery in Glendale, Cal. They were later joined by daughters Susan in 1945 and Elizabeth in 1947.

Mark made the Air Force his career. As a family, they loved to travel from one station to another, seeing as much of the country as possible. As a young officer, Mark flew the Berlin airlift, delivered aircraft to Iran, and had a memorable flight with Charles Lindberg as his passenger. He met a Pope, two U.S. Presidents, Milburn Stone “Doc” from Gunsmoke, and Ava Gabor (“Mark, Dahling”).

He served as comptroller of the DEW (Distance Early Warning) Line, and spoke throughout New York including the New York Press Club on how the DEW line was adding to our national defense. Later, he was comptroller of the Air Force Academy, and retired as chief of staff of that institution. He was a pilot almost the entire time.

After retirement, Mark and Rosie moved to Vail, Col., for the joys of fishing, hunting, and skiing. They then moved to Newcastle, to be near Susan’s family. Elizabeth joined them here in 2007. He loved being outdoors – hunting deer, moose, and elk. He fished whenever and wherever he could – the Grand Canyon, Lake Superior, the Wind River Range in Wyoming with grandson Pete, and taking the Labrador Air Safari to Lac Clair with son-in-law, Pete Glueck and his grandchildren.

Quieter moments found him collecting model trains, watching Patriot games, and playing penny a point poker with friends. He also enjoyed taking on his friends in a good game of squash.

A celebration of his life will be held from 2-4 p.m., Sat., Oct. 8 at Schooner Cove in Damariscotta.