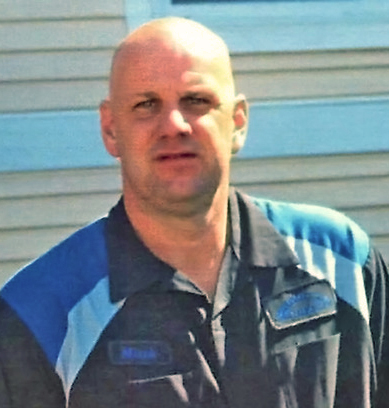 Mark Robert Woodman, 47, of Wiscasset, passed away suddenly on the evening of June 4, 2020 after suffering a heart attack. Born on Oct. 21, 1972 in Damariscotta, he was the son of Judith Alice (Benner) Seiders and the late Robert Edward Woodman.

Mark grew up in Bristol, attending local schools and graduating from Lincoln Academy in 1991. While at Lincoln, he attended Bath Vocational where he excelled in their automotive program. He earned many automotive certifications over the years, and worked as a heavy equipment mechanic and marine mechanic his entire life. He worked at many local garages and boat shops, and was working at Norm’s Used Cars at the time of his death.

Much like his father, Mark was truly a jack-of-all-trades – whether it was remodeling a room, building a camp, fiber-glassing a boat, or repairing a car, he was always willing to help anyone – just like his father.

Mark loved race car driving, and was a top competitor at Wiscasset Speedway. He competed in the Heavyweight Demons in the late 1990s and early 2000s, helping to make it one of the track’s most exciting divisions to watch. He finished his racing career with nine feature wins and a career best runner-up finish in the 1999 season. In recent years, he hung up his racing gloves, but continued as a volunteer at the track, driving both the push truck and the pace car. As much as racing, he also loved a good joke and a good time.

Mark truly loved spending time with his son, Mason. Together they spent countless hours working on special projects. Most recently, they were working on restoring a GMC truck, which will become Mason’s first vehicle. All who knew him will sadly miss Mark.

He is survived by his mother, Judy Seiders and her husband Raymond of Whitefield; son, Mason Robert Woodman of Damariscotta; sisters, Karen Sawyer and her husband Gary of Bristol, Krista Greenleaf and her husband Peter of Boothbay, and Kathie Beaulieu and her husband Scott of Sanford, Fla.; nephews, Marshall, George, Dustin, and Nicholas; grandnephews, Finley, Arlo, and Gavin; grandniece, Maia; and his soul mate and true love, Kelly Brewer of Wiscasset.

Per Mark’s wishes, he will be cremated and a celebration of his life will be held at a later time.

In lieu of flowers, donations to his son may be made payable to Mason Woodman, and sent to Bath Savings, P.O. Box 339, Damariscotta, ME 04543.