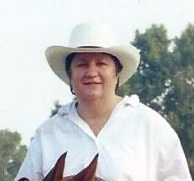 Martha Katharine Brittain, 67, of Waldoboro, passed away at Maine Medical Center in Portland on Nov. 24, 2019.  Kathy was born June 12, 1952 in Dallas, Texas to Perry George Brittain and Martha Nelle Black, where she lived most of her life. She graduated from Bryan Adams High School and then attended Austin College in Sherman, Texas where she earned a BA in art history. She attended Dallas Theological Seminary and earned a MA.

Kathy was married to Robert David Rauschenberg. They had a son, Carlton David, in 1978.

She worked for Kidder Peabody in Dallas and for Republic National Bank. She moved to the family farm in East Texas in 1999. She worked with cattle and raised Texas longhorns. She also had several horses and dogs, which she loved dearly. She also enjoyed gardening and growing roses. She was active in churches in Dallas, Center, and Timpson, Texas, where she taught Sunday school.

Shortly after her father, Perry, died in 2007, she and her mother moved to Waldoboro. They brought their dogs, horses, and a cat. She wanted to be near her son Carlton who works as a research associate at Bigelow Laboratory for Ocean Sciences. She loved the beauty of nature and enjoyed her time in Maine.

Kathy is survived by her son, Carlton; sister, Jennifer Giese of Bedford, Wyo.; mother, Martha Brittain; and many dear cousins and friends.

At her request, there will be no memorial service planned.

Gifts in her name can be made to her favorite charity, The Maine Society for the Protection of Animals, 279 River Road, Windham, ME 04062.