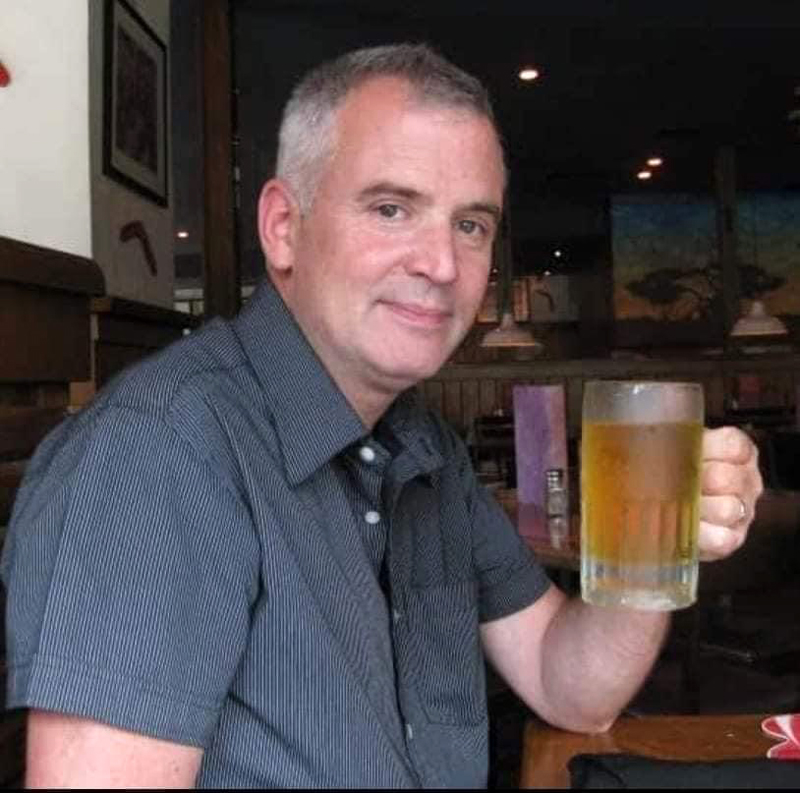 Matthew James Callahan, 60, passed away in his home in Castlerea, County Roscommon Ireland, April 29, 2020, his loving wife by his side and his four daughters joining in across the Atlantic, thanks to the blessing of technology.

Matt was the fourth of six children born to John “Bud” Callahan and Margaret Szabo Callahan, on Feb. 8, 1960 in New Haven, Conn. At the age of 15, he moved to Edgecomb with his family. He attended Lincoln Academy, where he graduated in 1978.

In 1983, Matt married his first wife Nancy Sidelinger Callahan and instantly became a dad to two beautiful girls, Amy and Jessica. Matt loved and raised his new daughters as his own. The following year, Matt and Nan welcomed another daughter, Kaitlin, and five years later their youngest Jocelyn was born.

Matt moved his family to Nobleboro where they continued to build a family and restored a house into a home. Matt served in the U.S. Marine Corps and was honorably discharged after Operation Desert Shield. Matt worked at Maine Yankee for many years, ending only with the company’s closing.

With the closure, Matt’s life would change in many unexpected and wonderful ways. A birthday gift of a home brewing kit would lead to a part time hobby becoming his passion and his legacy. In 1998, Matt moved his family to England and obtained certification as a master brewer. Matt apprenticed with some of the best brewers in England, the Isle of Man, and his beloved Ireland.

In 2000, Matt and his wife Nan divorced, but remained friends and confidants while raising their two younger daughters. While Matt always considered Ireland home, he would soon hone his brewing skills across the world, always craving the next adventure and challenge to excel in his craft. From Micronesia, to South Korea, to the Philippines, to Denmark, to Australia, and finally to India, Matt learned many traditions and techniques that he carried with him to each new venture. And it was in Micronesia he met his second wife and life partner, Mariefe. They would later build a plantation in his wife’s home country of the Philippines. Together, they would often visit Germany, Italy, and finally home to Ireland.

In 2012, Matt and Mariefe made Bangalore, India, their home for the next seven years, with Matt serving as head brewer for Toit Brew Pub. Matt would lead a revolution in the Indian brewing community, and soon became the president of the India Brewers Association. His reinvention of microbreweries in India reverberated across Asia and Europe, and made Matt a true beer master legend.

And it was in India that Matt was diagnosed with lung cancer. He suffered bravely but quietly. A hard worker, Matt would not let cancer stop his passion. Very few of his colleagues knew he was sick, even giving a news interview hours after receiving chemotherapy treatments. In 2019, Matt left India to rest and planned a final trip to the United States to see his family.

In October of last year, Matt returned to the U.S., along with Mariefe, for three months. While Matt received hospice care in his daughter’s home, he was able to visit with loved ones and gifted them lasting memories. He joyously met his new granddaughter Fiona for the first time. He proudly attended birthdays for his grandsons Jaxson and Austin. He happily passed out candy on Halloween, ate all the turkey on Thanksgiving, and wore the ugliest ugly sweater to the family Christmas party. He insisted on almost daily walks to the local pub with his daughters for a “quick” pint, all of whom happily obliged him. Though three months went by very fast, we could not be more grateful for the time we got to spend together as a whole family.

Rest in peace, Daddy. We love you.