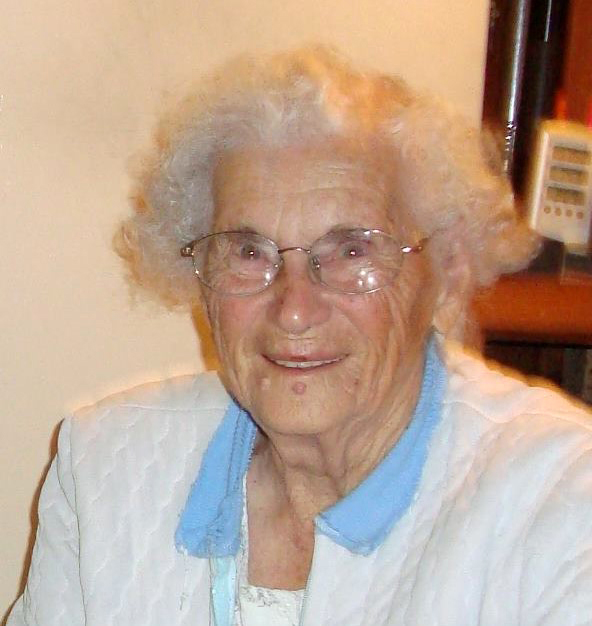 Mildred Stafford, 97, passed peacefully away Dec. 16, 2019 at Windship Gardens in Bath with her family by her side.

Born in Derby, Conn. on Jan. 7, 1922, she was the daughter of Earl H. and Ruth Hildebrandt Baldwin of Ansonia, Conn.

When she was three, she moved to Nobleboro with her parents to a farm on East Pond Road. She attended Emerson School, the one-room schoolhouse on the Upper East Pond Road, and was a 1940 graduate of Lincoln Academy. She worked at Miles Memorial Hospital when it was still on Church Street in Damariscotta and helped move it to its present location on Hospital Point.

She met the love of her life George Stafford in 1942 at a dance hall on Clary Hill in Jefferson. They were married Jan. 19, 1943. She loved dancing which they continued for the rest of their lives.

She was an avid hunting and fishing enthusiast and bagged many deer and ducks all over the region, quite often the first in the hunting parties to do so.

Milly served on the conservation committee, school board, and long range planning committee, and was the town historian for Arrowsic. The Arrowsic 2001 Annual Town Report was dedicated to George and her.

She was secretary of the town fire department and kept copious ledgers of all the calls. She could be seen stuffing the wet and dirty hoses in the back of her car after a fire which she took home to clean and lay on her lawn to dry, ready for the next call. In 2019 she had a new fire truck christened with her name on the door.

Milly spent many summers at their camp in Damariscotta Lake teaching her son and all her younger brothers and sisters how to swim, hunt, and fish. Many evenings were spent around the campfires telling stories and singing songs with friends.

Milly had a strong love of her high school, Lincoln Academy, and could be seen at basketball games selling 50-50 tickets and may still hold the record of over 600 sold in a single night.

She spent as much of her life as she could outdoors where she managed wonderful spacious flower and rock gardens.

Milly is survived by her son, Lee of Nobleboro; two grandsons, Tim of Troy, Ohio, and Terry of Nobleboro; granddaughter, Tina Lugay of Long Beach, Calif.; two great-grandchildren, Dereck of Red Bluff, Calif., and Alexander and his wife Alexis of Dayton, Ohio; two great-great-grandchildren, Alexander and Amaya, also of Dayton, Ohio; brothers, Paul and Bob of Nobleboro, and Doug of Woolwich; sister, Jean of Haines City, Fla.; and many in-laws, nieces, nephews.

She was predeceased by her husband, George; brothers, Earl Jr., Ray, Les, and Don; and sisters, Marjorie Murphy, Esther Swift, and Dorothy Giles.

A celebration of her life will be held at a later date in the spring of 2020.

Contributions may be made to Lincoln Academy, 81 Academy Hill Road, Newcastle, ME 04553.

Arrangements are with the Hall Funeral Home in Waldoboro. Condolences and messages for her family may be expressed by visiting hallfuneralhomes.com.