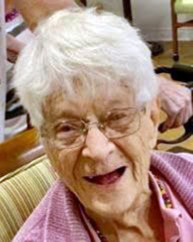 Milicent Edna Averill Goodwin Moody, 93, of Wells, passed away at Gosnell Hospice on Oct. 14, 2021. Milicent was born on Oct. 2, 1928, in Weymouth, Mass., the daughter of Perley W. and Maude E. Kennedy Averill. She graduated from Hingham High School in 1947 where she was a drum majorette. After high school, she trained in the airline industry, and as a switchboard operator. In 1953, she married Richard Goodwin and had three children, a son Neil, and two daughters, Susan and Dawn.

In 1965, after Richard passed away, she and the children moved to Wells. In 1975 she married Donald Moody. Milicent belonged to the York County Extension, the Wells Congregational Church, Wells Grange, and Bauneg Beg Grange.

She will be remembered as a loving mother, grandmother, and great-grandmother. She was independent, strong-willed, funny, and loved making friends. She was also a talented seamstress who one year in the 1970s, sewed all the uniforms for the Wells High School cheering team. She loved knitting mittens and sweaters for her family, and she loved her chocolate, and her cats.

Milicent was predeceased by her parents; brother, Linwood Averill; husbands, Richard Goodwin and Donald Moody; grandson, Aron L. Peaslee; and great-granddaughters, Elizabeth and Saralynn Orff. She is survived by her son and daughter-in-law, Neil and Beth Goodwin, of Wells; daughters and sons-in-law, Susan and Neil Peaslee of Somerville, and Dawn and Wally McWilliams of Rincon, Ga.; two sisters-in-law; nine grandchildren; and their spouses; 16 great-grandchildren; and several nieces, nephews and cousins.

A graveside service will be held at Pine Hill Cemetery in Wells Branch at 11 a.m. Saturday, Oct. 23. A reception will follow at the home of Neil and Beth Goodwin on Burnt Mill Road in Wells. Please wear a mask.

The family would like to thank the staff at Avita of Wells and Gosnell Hospice for their loving care of our mother.

In lieu of flowers, please consider a donation to the Animal Welfare Society, P.O. Box 43, West Kennebunk, ME 04094 in Milicent’s memory.

To share a memory or to leave a message of condolence, please visit Milicent’s Book of Memories Page at bibberfuneral.com.