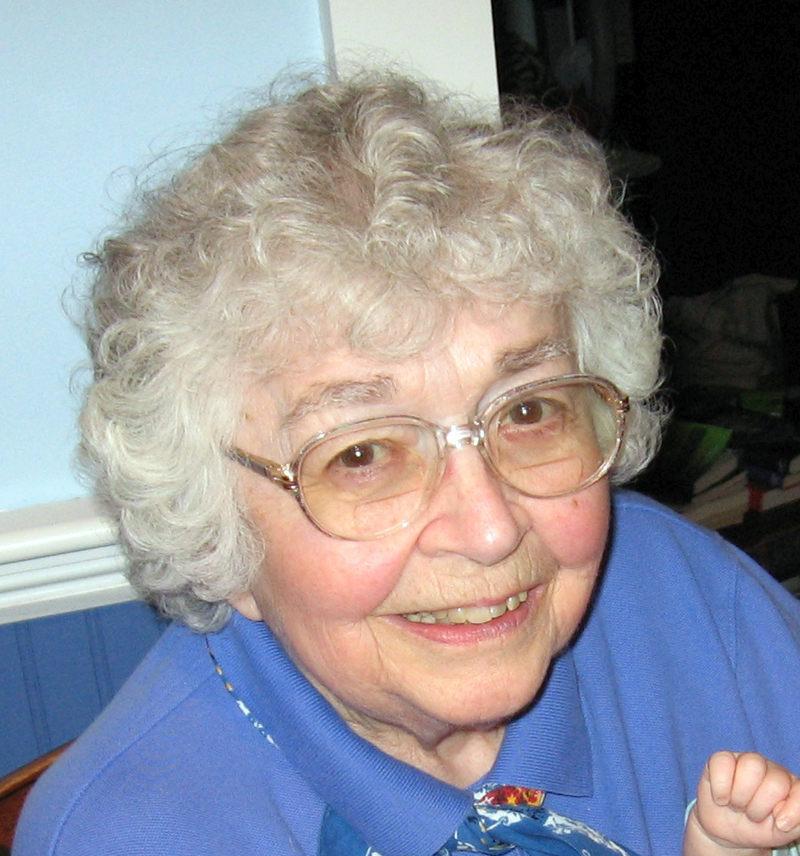 Miriam LeMay Blackmon, of Waldoboro, passed away on Monday morning, Dec. 16 at the age of 97, after a long, fruitful, and interesting life. A graduate of UMass, Ayer, she was a loving wife, mother, avid reader, tent camper, cook, explorer, furniture restorer, and very handy with a sewing machine. She loved family, the ocean, the rocky coast of Maine, the Boston Red Sox, lobster, and a nightly bowl of ice cream.

Born on Sept. 7, 1922 in Belfast to the Rev. Harold Edward LeMay and Ruby Helen Marston LeMay, Miriam was the second of five children. She survived her siblings: David, Harold, Rebecca LeMay Strange, and Barbara LeMay Gulla.

Miriam wed Lt. Clinton R. Blackmon on April 15, 1945. They were married for 61 years until Clinton’s passing in 2006. Together they raised and loved five children, 11 grandchildren, six great-grandchildren, their in-laws, and their friends. She is survived by her daughter, Rebecca, with whom she lived, and her four sons, Daniel (Linda Sands) of Beaufort, S.C., Whitney (Markie) of Holland, Penn., Christopher (Peggy) of Waldoboro, and Jonathan (Elsie) of Kenilworth, Penn.

In 1923, Miriam’s first birthday was on a ship in the China Sea, as her missionary father moved the family to Shaowu, China, to serve the Williston Church’s foreign mission. Miriam contracted polio while in China, crippling her left leg. By 1927 the Chinese Civil War and its roaming renegade bands of solders forced the family to evacuate down the Min River, at times under gunfire, to the port at Fuzhou on the China Sea, from there to Japanese occupied Taihoku, Formosa (Taiwan), then Tokyo, and to the US on July 4, 1927.

Settling initially in Bangor, they soon moved on to a mission in Ashland, Aroostook County. They relocated in 1928 to South Bristol, moving again three years later in 1931 to Ayer, Mass. after her father was called to the Federated Church of Ayer. There at a church social she met and fell in love with Army Lt. Clinton Blackmon, who was stationed at Ft. Devens prior to his shipping out to Australia and the Philippines in WWII. At UMass she studied English and Home Economics for a BA degree, fulfilling a major childhood ambition from as far back as she could remember.

After living in Brownsville, Texas for a year while Clinton recovered from mortar shell wounds, she continued to move with him as Clinton pursued his PhD at UMass and Rutgers University, N.J., buying her first house with Clinton in Doylestown, Penn.

Miriam and family moved back to Maine in 1956, landing in Old Town. After moving to Panama City, Panama in 1962, Miriam and her family were forced to evacuate to the Panama Canal Zone following the anti-American riots of 1964, then further to Gulfport, Fla. 1964 brought her to New Britain, Penn., where she substitute taught high school English while she and Clinton focused on their family and church. It wasn’t until 1987 that Miriam and Clinton retired and moved back to Maine, settling in Waldoboro, where they joined the United Methodist Church. After all the travelling, Miriam was happy to be back in Maine!

A private family service will be held and she will be laid to rest with Clinton in the Brookland Cemetery, Waldoboro.

In memory of Miriam LeMay Blackmon, memorial donations may be made to The Waldoboro Ambulance Association, P.O. Box J, Waldoboro, ME 04572.