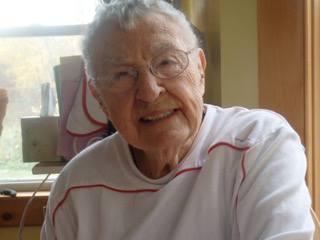 Muriel Lavigne Abair, resident of Lincoln County, most recently of Jefferson Green, left this world on March 12, 2019 after 93 adventurous years on this earth.

Muriel attended Brunswick schools and in December of 1943, after a whirlwind courtship, she married Allen Abair and began their nearly 60 years of life together. Raising six children in Maine found them spending hours at the beach, on the sea, in the gardens, in the berry patches, camping all over New England and fishing in every fishing hole known to man during their long Sunday afternoon drives and weeklong camping adventures.

Her work history centered around banking activities—first at St. Charles Credit Union after her children were in school all day and later at Sun Bank and Trust in Florida where she and her husband moved in 1969. As a young mother she left an impressive resume with her children as she grew beautiful gladioli of all colors and vegetables that she later canned or froze for winter eating, dressed her five daughters in beautifully smocked Easter dresses, spent long summer evenings picking wild Maine berries for jam, knitted sweaters and mittens year-round, baked about 25 Maine whoopee pies several times a year for family and friends, tended to her large and small homes with a passion, and helped at school events, church events, and scout events. Her skills on the softball field at mother-daughter ballgames were legendary.

Muriel’s ashes will be interred with her husband at the Veterans Cemetery in Augusta on Monday, March 18. Masses in her honor will be arranged at St. Patrick’s in Newcastle and at St. Charles in Brunswick.

In lieu of flowers, the family suggests that donations be made in her honor to the Jefferson Green, 77 Waldoboro Rd., Jefferson, ME 04348.