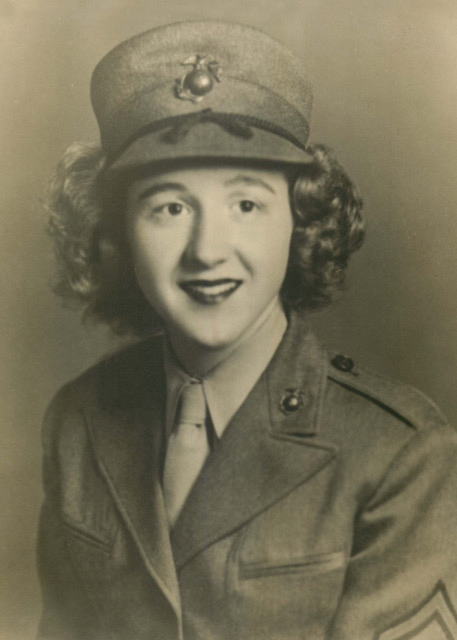 Muriel Louise “Willie” Wilhelm, 96, passed away on the morning of Dec. 10 at the Maine Veterans’ Home in Augusta, following a long period of declining health. She was a daughter of the late William Carroll and Leona (Kempe) Wilhelm of Westfield, N.J.

During WWII, she proudly served in the U.S. Marine Corps Women’s Reserve as a clerk typist stationed in Washington, D.C. She was discharged with the rank of Sergeant in 1946.

Following her service, she worked for the Bell Telephone Company as a service representative, and attended evening classes at Columbia University Teachers College, earning a Master of Education (1961) and Professional Diploma (1964) in Guidance and Student Personnel Administration.

She worked in higher education administration until retirement, serving in New Jersey as assistant registrar and assistant director of admissions at Newark State College. She also served as registrar at Middlesex County College; and in New York, as coordinator of curriculum development at SUNY, Albany; and registrar at Empire State College, SUNY independent study division.

Her love for her adopted state of Maine began early in life, as she attended summer camps Balsam Knoll on Orr’s Island and Linekin Bay (now Linekin Bay Resort) in the Boothbay region. Upon retirement in 1971, she moved to Bristol. Her retirement years found her volunteering at Skidompha Library in Damariscotta, in the library of the U.S. Veterans Administration Medical Center at Togus, and at the Hog Island Audubon Camp in Bremen. She also became interested in archaeology, participating in a number of digs along the Damariscotta River and processing artifacts in the laboratory of Timothy Dinsmore in Walpole. In 2014 she moved to Schooner Cove Retirement Community in Damariscotta.

Muriel will be laid to rest privately in the Maine Veterans Memorial Cemetery in the spring.

Muriel’s love of books and cats is well-known; those wishing to make a donation in her memory may do so to either the Skidompha Library, PO Box 70, Damariscotta, ME 04543; or to your local animal shelter or animal rescue group.