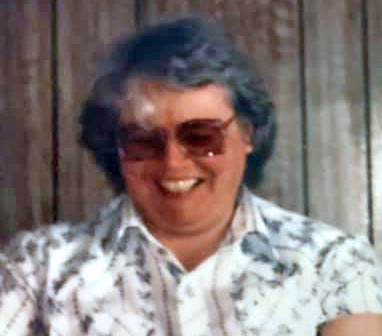 Myrna was born the eldest of eight children to Etta (Buswell) and Mertic Morrison in Bar Harbor, April 15, 1947 (our beloved tax baby). Myrna grew up on Swan’s Island, where she lived and worked as a skilled carpenter for many years before moving to Waterville. Many of you will remember Myrna’s good works for the church, her love of animals, or her tasty baked treats. The last of which earned her the title of Auntie Custard!

Myrna was predeceased by her father, Mertic Morrison; and brother, John A. Morrison.

Myrna is survived by her mother, Etta Morrison; along with her siblings, Linda Morrison, Christine Lewis, Dennis Morrison and his wife Tami, Michael Morrison, Mary Stevenson and husband Tom, and April Morrison. She is also survived by her longtime friend, Kirk Russell; as well as many aunts, cousins, nieces, and nephews, and an uncle.

Do Not Stand at My Grave and Weep

Do not stand at my grave and weep

I am not there. I do not sleep.

I am a thousand winds that blow.

I am the diamond glints on snow.

I am the sunlight on ripened grain.

I am the gentle autumn rain.

When you awaken in the morning’s hush

I am the swift uplifting rush

Of quiet birds in circled flight.

I am the soft stars that shine at night.

Do not stand at my grave and cry;

I am not there. I did not die.