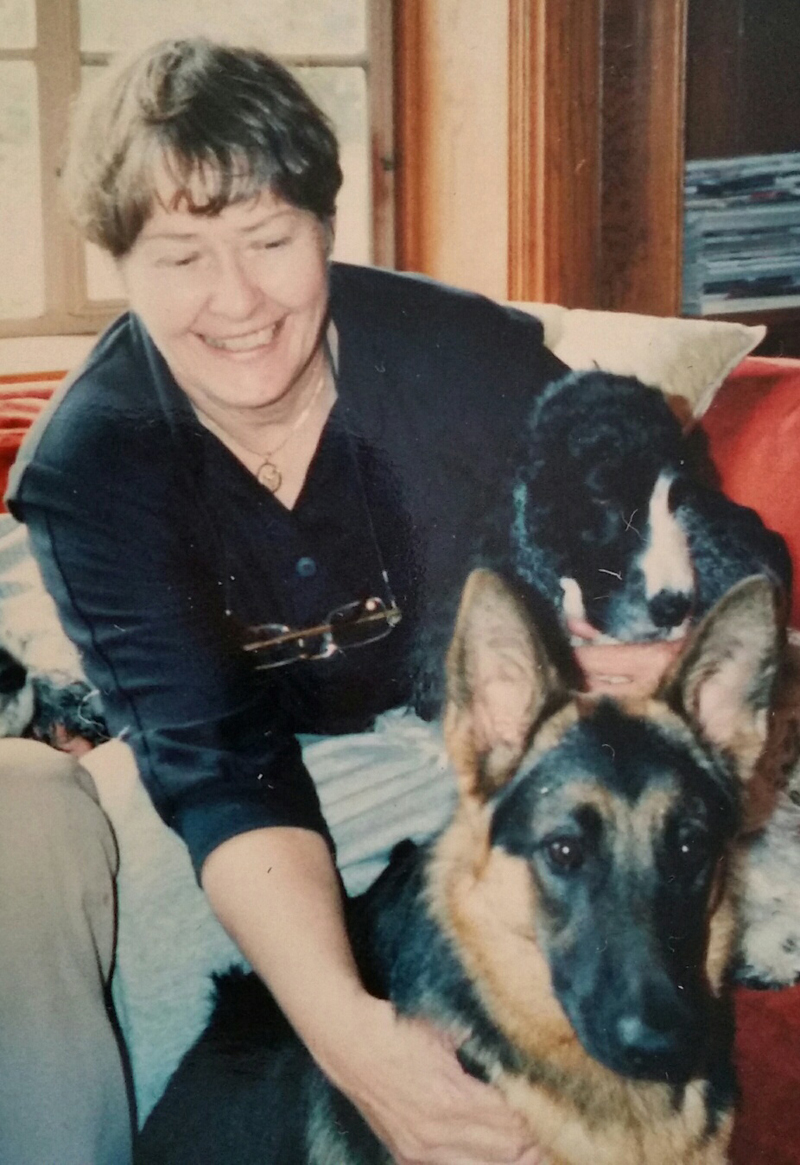 Nancy Caroline (Jackson) Overton, 88, passed peacefully at MaineGeneral Hospital (Alfond Center for Health) in Augusta on Feb,.1, 2020, after a period of failing health. Born in Springfield, Mass. on Feb. 26, 1931, she was the adopted daughter of Willis T. and Lillian B. (Boucher) Jackson of Shrewsbury, Mass., where she grew up.

She was a graduate of Kent’s Hill School for Girls in Kent’s Hill. She trained as a lab tech in Boston-area hospitals and assisted at many blood drives. In her mid-20s, she moved to Dallas, Texas to continue her lab tech career. She married Edward Overton, a gas and oil well drilling business owner, on May 8, 1957.

Nancy’s husband died in 1992. By 1995, she had sold the Dallas house and moved, with her four dogs, to Maine to be to nearer relatives in the New England states. She bought a small farm in Jefferson and named it Quilli’s Rest after a favorite dog. Though she no longer was on the show dog circuit, she was a long-time member of the ECSCA (English Cockers) and NEGSDC (German Shepherds). In recent years she was proud of her contributions to those clubs over the years, and recently through the hard work (transporting and cataloging her collections of awards, photos, books, training equipment and other memorabilia) by her friend, Karen Whitfield. Nancy fostered one of Karen’s champion English Cocker show dogs, Maybelline, until she entered the nursing home in 2019.

Over the 25 years she resided in Jefferson, Nancy enjoyed owning and riding a few horses and raising chickens while continuing her love of photography. In Texas, she had taken courses and owned several cameras, her own dark room and developed her own photos. She subsequently took more classes in photography in Damariscotta, perfecting the art.

She and her dogs could often be found near the ocean, blueberry barrens, atop hills and at many other remote sites “in the boonies” discovering the perfect camera shot with her well-trained eye. Many of her photos were taken right outside her Jefferson home, recording and documenting the changing seasons and capturing the picturesque scenery full of wildlife and birds. She loved to travel and often went RVing with neighbor, Bob Teel, and their dogs. They enjoyed many family gatherings with his family on Teel Island in St. George and with her family at her brother Donald’s farm in North Waldoboro.

As a creative gardener, she enjoyed designing the landscaping for the area around her home, choosing and planting trees and shrubbery, having a pond dug, putting in many flower beds and a few raised-bed gardens for fresh vegetables, with the assistance of close neighbors, Natasha and Dan Brilyea. Undaunted by hard work, she was an avid mower of her large lawns for many years before her health decline and could be found on the riding mower for hours to complete the mowing task. Summer evenings she drove her Gator to the pond to feed the fish and turtles living there.

Being a Christian, Nancy attended several different churches in the area and was faithful in her beliefs, having been led to Jesus by her friend, Jackie Mason, at a Billy Graham revival in Augusta in the late 1990s. In 2018, she decided she would read the Bible from cover to cover. She completed that personal commitment two months before she passed.

Special thanks from her family to the caring staff at Country Manor Nursing Home.

At her request, there will be no funeral, but a memorial service will be announced later in the spring.

Donations in her memory may be made to Midcoast Humane, 190 Pleasant St., Brunswick, ME 04011 or a church of your choice.