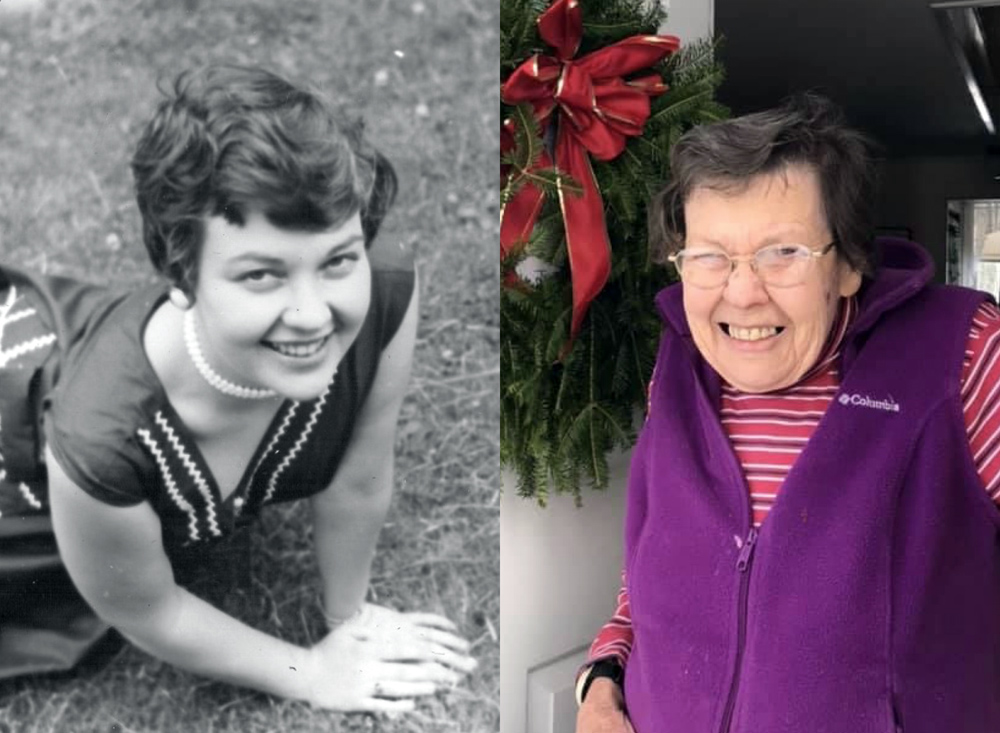 Nancy Clair Weller Brown, 88, of Appleton, passed away peacefully at her home with her family by her side on May 22, 2021. She was the loving wife of Theodore “Ted” Brown, who predeceased her in 1990.

Nancy was the only child of R. Franklin and Florence T. Weller. Born in Brooklyn, N.Y., she grew up in Cranston, R.I., where she served as a “candy-striper” hospital volunteer during her teenage years. She graduated Cranston High School in 1950 and Colby College in 1954, receiving a Bachelor of Arts degree in biology with a minor in art. During her college years, she served as a counselor at Camp Merestead for girls (now Bishopswood) in Lincolnville, where she cultivated a love of the outdoors and nature. Nancy met Ted through Colby’s theater program, where pretty Nancy painted scenery and charming Ted was an actor.

After college, Nancy worked at Deaconess Hospital in Boston as a medical artist and photographer; her drawings and photos were featured in medical journals and textbooks. She and Ted married in 1956 and moved to Arlington, Va. near Ted’s work as a patent attorney at the U.S. Patent Office in Washington, D.C., and Nancy started their family with the arrival of their first two children. In 1960, they moved to Maine for Ted’s job with Tibbetts Industries in Camden, and Nancy delivered their third child. They bought their dream home in Appleton in 1961, where they rounded out their family with five more kids.

Nancy planted a huge vegetable garden and herb gardens around her home well into her senior years, canning many jars of vegetables and jellies, and filling her root cellar, to carry her family through the long Maine winters. She earned Christmas money for her large brood by making carloads of beautifully decorated wreaths each winter, with balsam tips and cones she collected herself. Sap on her hands and dirt under her nails were signs of happy creative accomplishment.

In addition to caring for her family, Nancy had a busy, productive, and worthwhile life outside the home. She was active in many nonprofit organizations in and around Appleton. For decades, she served as volunteer librarian at the Mildred Stevens Williams Memorial Library, where she could reliably be found on Thursday nights, sharing her love of reading with her town. She was also active in the Appleton Historical Society, serving in leadership roles for many years. In the 1960s with the Cub Scouts and in the 1970s with 4-H, Nancy opened her home and heart to teach cooking, sewing, camping, and many other skills she had taught herself over the years.

Nancy and Ted hosted town functions at their homestead, including distribution for the community food co-op, and the town Little League baseball field. Nancy served as a notary public and justice of the peace and officiated local weddings. She was a regular fixture at the Union Fair, manning the Exhibition Hall or 4-H building throughout the week, and in later years made friendships volunteering at the Matthews Farm Museum and Knox-Lincoln Soil and Water Conservation District.

Nancy was an accomplished artist, creating bird- and flower-themed jewelry for craft sales, and painting still-lifes and landscapes. She supported Appleton functions and fundraisers by handcrafting creative event posters and hanging them throughout Knox County. Her breads, cinnamon rolls, and other baked goods were sought after at benefit suppers and community gatherings. Nancy’s home and kitchen table were always open to anyone who wanted to stop by and enjoy a cup of coffee, homemade cookies, and thoughtful conversation.

With other like-minded local artists, Nancy started an art program for the Appleton Village School and served as a volunteer art teacher. Later, she worked as a math teaching assistant at the Mary E. Taylor School in Camden. In retirement, she returned to Appleton Village School to volunteer in the kindergarten classroom. For two decades starting in the early 1980s, Nancy was the bookkeeper and a rare-plant propagator at Merry Gardens nursery in Camden. Nancy used her Camden commute to give rides to high school students from Appleton, allowing many to participate in after-school sports and other activities. She finally hung up her professional garden trowel in her 70s. Nancy enjoyed a long retirement at her homestead in Appleton, dedicating her time to her grandchildren.

Nancy is survived by her eight children, Allan, Peter, David, Carolyn, Laurie, Kenneth, Raymond, and Suzanne, and their spouses. Nancy is also survived by her 15 grandchildren, Hayley Johnson and Leslie Brown Andrew; Keegan DuBrown and Harmony Brown; Jalina Brown; Shelby, Winston, and Hayden Crowell; Moll and Noah Brown; Ethan and Owen Brown and Haoran Zhang; and Carson and Emmett Appel; as well as her great-granddaughters, Evelyn and Bridgette Johnson.

The Brown family wants to express our thanks to our Appleton friends and neighbors for their support in recent years, and our deepest gratitude for the wonderfully kind and personal home visits, medical assistance, end-of-life care, and true friendship provided by our mother’s caregiver and companion of six years, Angela Stevens of Washington.

A graveside service will be held in Appleton’s Pine Grove Cemetery at 10 a.m. on Thursday, May 27; arrangements by Long Funeral Home. A celebration of life will take place on Saturday, June 5, details to be announced.

Gifts in Nancy’s memory may be made to the Appleton Historical Society Steeple Fund for restoring the Appleton Union Meeting House, via gofund.me/adbe7649; or to the society at 2916 Sennebec Road, Appleton, ME 04862.