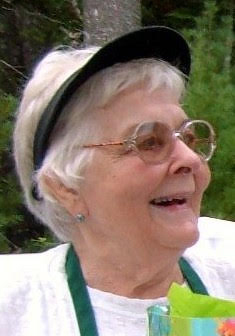 Nina Brann Aho, of Union, died on Dec. 24, 2016 at the Augusta Center for Longterm Care after a period of declining health. She was born to Delbert and Georgia Colby Brann in Whitefield on Aug. 31, 1920. She was the oldest of seven children.

On Feb. 24, 1946 she married the love of her life, Bruno Aho. They met at a dance – she was pretty – he was handsome, they clicked. After getting married they lived briefly in Turner before settling on the Aho family farm in Union where Nina resided for the rest of her life.

Nina was a cheerful, fun-loving, big-hearted, warm person with a hearty laugh and embracing hug who loved life and people. As a young woman Nina loved to attend local dances and enjoyed the company of friends. After moving to Union she helped run the family chicken farm and helped to care for her father-in-law, Henry Aho. For extra money, she made Christmas wreaths each fall. For a number of years she worked as bookkeeper for A.L. Stewart and Sons, a local blueberry processing plant in Union.

She was the devoted grandmother to Daniel Aho, rarely missing any activity he was involved in. Many hours were spent on bleachers in venues around the state. A great pleasure was following Dan as he progressed from Little League through American Legion Baseball.

In keeping with her wishes there will be no visiting hours or funeral service. The family will have a memorial service at a time and place to be named at a later date.

Gifts in Nina’s memory can be made to the Pope Memorial Humane Society of Knox County, PO Box 1294, Rockland, ME 04841.