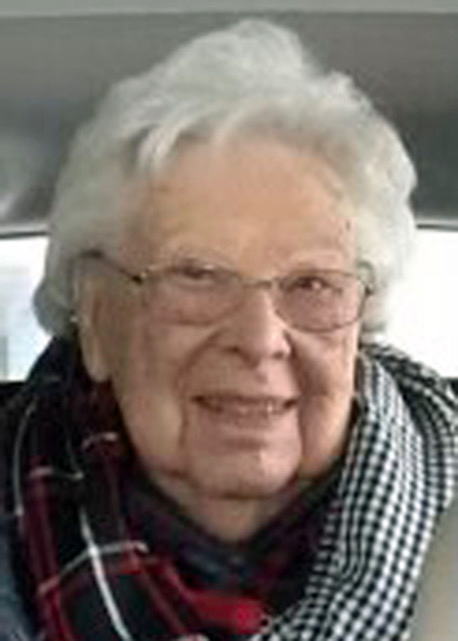 Olevia Haley Cable Watson, 99 (and a half), passed away in the early morning hours of Feb. 27, 2022, at Horizons Living & Rehab Center in Brunswick, after a period of declining health. Born in Dover, N.H. on July 31, 1922, she was the second child, and only daughter, of Lawrence and Cassie (Hall) Haley.

Olevia grew up in Barrington, N.H. where she attended local schools. She graduated from Dover High School in 1940, and received her bachelor’s degree from the University of New Hampshire in 1944.

After graduating, she moved to Boston to begin a long career in retail, working at Conrad’s Department Store. She moved to New York City in 1951, where she worked in the accounting department at Stern Brothers. It was there she met her first husband, George Cable Jr.

Olevia and George were married on Aug. 8, 1953 in Barrington, N.H., and the couple moved to Tappan, N.Y. where they raised dachshunds, and where their two daughters were born; Ann in 1955 and Betsy in 1958.

Having had a love of Maine, where they had honeymooned on Monhegan Island, they loaded up their family and moved to Newcastle in 1961. It was there they opened Cable’s Gift Shop, located in the converted three-car garage of their brick house on the River Road.

After George passed away in 1976, Olevia continued the business with her daughters when they were home during college breaks and summers. She would marry James Watson on Jan. 8, 1982, and in 1983 she closed the shop to spend time fishing and traveling with Jim.

Cable’s Gift Shop may have closed, but that didn’t mean Olevia slowed down. In her “retirement” she continued to work and volunteer. She worked at Lilac Cottage, and volunteered at Skidompaha Library regularly, even doing so after her 99th birthday.

She loved cooking, knitting, traveling, playing bridge, and listening to her granddaughter Haley’s music. She was very active in the Girl Scouts, both locally and on the state level, as well as AFS through Lincoln Academy and on the state level. She taught Sunday school at the Second Congregational Church of Newcastle, was on the boards of the Lincoln Home and the local adult education program, and was a member of the Newcastle Garden Club.

Besides her parents and both husbands, she was predeceased by her brother, Waldron Haley and his wife, Grace McDaniel Haley; sister-in-law, Nancy Cable Burns and her husband, Herbert A. Burns; and step-son, James Birger Watson.

Olevia’s family would like to wholeheartedly thank the staff of Schooner Cove, Cove’s Edge, Chase Point, Horizons Living & Rehab Center and Beacon Hospice, for their wonderful care of Olevia the past several years.

There will be a celebration of Olevia’s life, on what would be her 100th birthday, Sunday, July 31 at The 1812 Farm in Bristol.