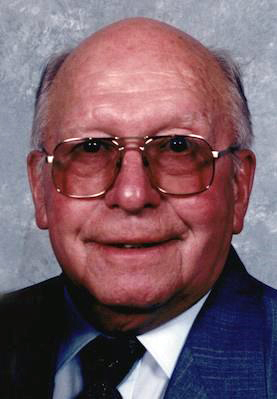 Leo was born March 14, 1927, in Des Moines, Iowa, son of Paul Leo “Mac” McMullin Sr. and Marie Baker. He received his education at the Granger public schools and then enlisted in the United States Army, serving his country during World War II. Following his discharge, he returned to Granger and was united in marriage to Marilyn Hoskinson on April 3, 1948 in Madrid, Iowa.

Leo and Marilyn made their home in Luther, where they raised their family. Leo worked for John Deere in Ankeny until his retirement in 1984. He also delivered newspapers for the Des Moines Sunday Register for more than 30 years around the Luther, Madrid, and Slater area. All of his children learned how to drive a stick shift under his guidance on Sunday mornings as they delivered papers. Following his retirement, Leo and Marilyn became snowbirds, traveling between Iowa and Florida. During the summer months, Leo worked for Heideman Drywall in Ames for 10 years.

In his free time, Leo enjoyed volunteering in the community. Leo was a leader for the Boy Scouts, volunteered at St. Malachy’s, served on the Luther Town Council, and was a volunteer tour guide for Boone Scenic Valley Railroad. In Florida, he and Marilyn delivered Meals on Wheels and supported the local food pantry.

Leo always enjoyed time with his family, traveling, a hearty breakfast, and a good joke. He was known to enjoy a night at Lake Robins, an ice cream cone from the Boone Dairy Queen from time to time, and he rarely missed the Thursday morning Luther breakfast meetup at McDonald’s in Boone. His love of John Deere continued and in his later years he was seen in parades with his restored Johnny Popper.

He was preceded in death by his parents; wife, Marilyn; son, Mick; son-in-law, Terry Seeman; and his brother, Eugene.

A private family service will be held at 11 a.m., Thursday, Dec. 3 at St. Malachy’s Catholic Church in Madrid with burial to follow in the Lincoln Cemetery near Polk City.

A celebration of life will be held at a later date.

In lieu of flowers, the McMullin family would prefer that you make a donation to your local food pantry or your local Meals on Wheels program during these trying times.

Please visit Leo’s obituary on Thursday at 10:45 a.m., where a livestream link will be available to watch the services.

Sundberg-Kirkpatrick Funeral Home is in charge of arrangements.