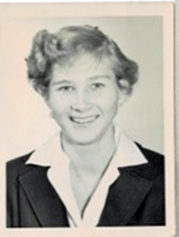 Known as Polly, she was born in Lynn, Mass., and lived in Salem, Mass. and Washington, D.C. She met her husband, Rolf, at Catholic University, while she was a student at George Washington University. They married in 1958 and lived in Springfield, Va.

In 1970, they moved to Searsport with their five children, following her parents, who had recently settled there. All staunch Democrats by virtue of open-mindedness and intelligence, Polly and her family were influenced by her father’s long career in law, the Secret Service, OSS, CIA, and his position as district attorney of Waldo County.

While Rolf worked 70-plus hours a week at their drugstore, Polly ran a loving household with numerous guests and many large meals around the dining room table. Calling Polly a ravenous reader would be a huge understatement; reading and discussing books was a lifelong passion for her. She finished her library science degree at the University of Maine at Orono, and inspired many young readers as librarian at the Wiscasset Middle School, where she worked after moving to Nobleboro in 1986. A passionate learner with a noteworthy memory, she was exceptional at Jeopardy! and Trivial Pursuit. Despite suffering from dementia the last couple years of her life, she was an avid Scrabble player right up until the end.

She was a longtime volunteer at St. Patrick’s Church in Newcastle; Skidompha Secondhand Bookshop and Miles Memorial Hospital, both in Damariscotta; and other organizations important to her. She was also an enthusiastic supporter of the Met operas at Lincoln Theater in Damariscotta.

Polly was cremated and her ashes will be interred at St. Patrick’s at a memorial service to be held on a future date once we can gather together safely.

In Polly’s honor, recognize how magical nurses are, encourage learning through play, and put down your phone and read a book.