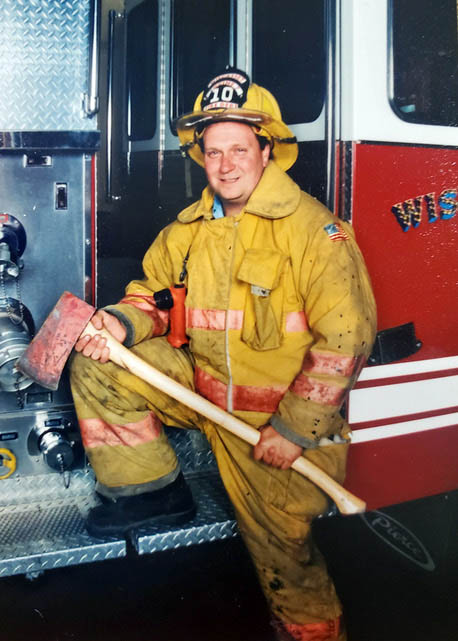 Peter Lincoln Rines, 59, of Wiscasset, passed away on the afternoon of Sept. 8, 2021, following a long illness, surrounded by his loved ones. Peter was born in Damariscotta on Aug. 19, 1962, the fifth of seven children born to Benjamin and Virginia (Butler) Rines.

On the day of his eighth grade graduation, Peter bought himself a 1930 Model A. It was a pile of rust and rubble that he would restore, with the help of Chum DiPerri, just in time to drive it to his high school graduation in 1981.

Growing up on Churchill Street, Peter could see the municipal building from the kitchen window, the fire department and ambulance service, just down the street. He was extremely dedicated to both departments, and served as ambulance director in 1997, and more recently as acting fire chief.

Barely out of high school, he would open a Cannon Towel factory outlet in town; and later, along with his father, he did carpentry work. Give him a hammer and say, a few boards and nails, and he could turn your place into a palace.

During the 1990s, Peter worked as the town’s “full time fireman,” which meant a jack-of-all-trades. One of his first projects was to build a garden shed for the sunken garden, it’s still there.

In 2000, Peter was elected to the first of four, two-year terms, in the Maine House of Representatives. He thoroughly enjoyed serving the many citizens of Wiscasset, Alna, Whitefield, Windsor, Somerville, Hibbert Gore, Randolph and Pittston in the legislature.

It was an evening of pride and enjoyment for the entire family, to witness Lincoln Lodge #3 of Wiscasset installed him as Master Mason. He was also a member, and past President, of the Wiscasset Alumni Association.

For the past seven summers, Peter and Jim worked and camped at Meadowbrook Camping in Phippsburg, much of that “work” being Peter and the campground owner, Chris Mixon, tinkering on one old car after another.

Peter loved holidays; driving his jalopies in the town’s 4th of July parades, having Thanksgiving get-togethers and every Christmas, creating outdoor displays with lighting that his mom would have loved.

Besides his parents, Peter was predeceased by his sister-in-law, Janet (Skidmore) Rines.

He is survived by his long-time companion, James Smith; his sister, Pamela (Rines) Soule and her husband, Sam; five brothers, Larry Rines and his wife Carol-Ann, Ben Rines Jr., Robert Rines and friend, Sue Varney, Mark Rinesand his wife, Lori, and Ray Rines; two step-daughters, Megan Smith and her boyfriend, Andrew Mahonen, and Mackenzie Smith and her boyfriend, Joey Norris; as well as many nieces and nephews.

A private graveside service will be held at the Greenlawn Cemetery in Wiscasset. There will be a public celebration of life, from 1-4 p.m., on Sunday, Sept. 19 at the Wiscasset Fire Station.

Arrangements are under the directions and care of the Strong-Hancock Funeral Home, 612 Main St., Damariscotta. Condolences, and messages for his family, may be expressed by visiting stronghancock.com.