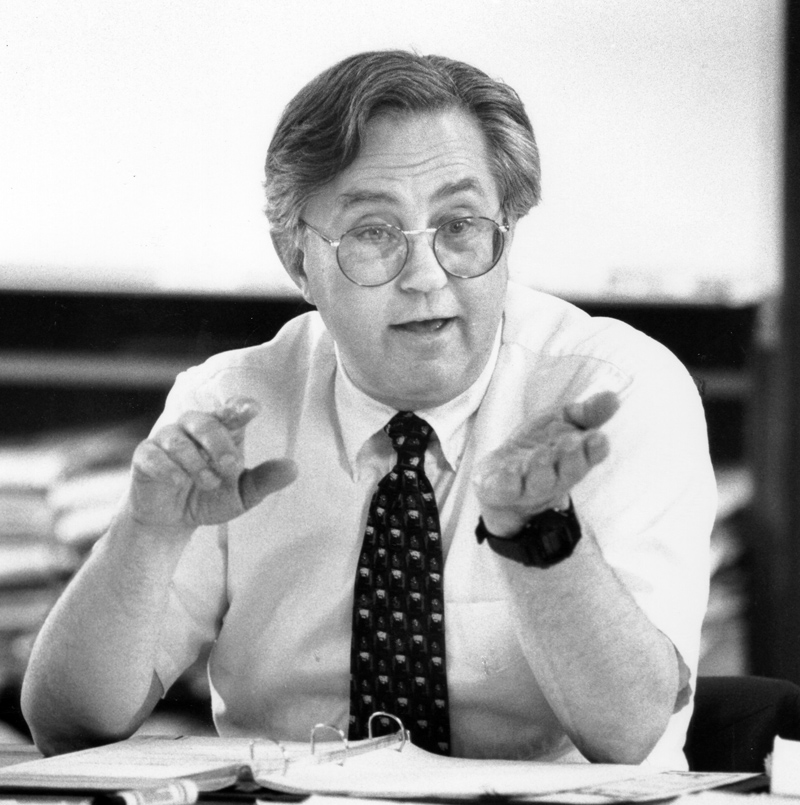 Philip H. Hansen III, 79, died Friday, June 25, 2021 at The Landing at Saco Bay, a memory care facility in Saco where he had resided since 2017. A graduate of Bowdoin College in Brunswick and Union Theological Seminary in New York City, Phil was a revered secondary school educator who earned an international reputation as a skilled debate and Model U.N. coach.

He was born Nov. 15, 1941, in Portsmouth, N.H., the son of Capt. Philip H. Hansen Jr., and Gertrude Louise Gamage Hansen. He lived in Falmouth until the age of 9 when the Hansen family moved to the small farming town of Jefferson. He was educated in the Jefferson Village School (most notably by seventh and eighth grade teacher Edna Parlin, his early mentor and inspiration) and at Lincoln Academy where he excelled academically and in debate and public speaking.

Phil’s teaching career included faculty positions at Kimball Union Academy, English; the Woodstock Country School in Vermont, English and headmaster; and for 23 years, Roxbury Latin School, where, as chairman of the history department, he taught world history, western civilization, U.S. history, modern European history, African history and political theory. When, at age 28, he was asked to take the helm at Woodstock Country School, he became the youngest headmaster in the country.

At Roxbury Latin, his accomplishments included reviving the school’s debate team and founding the Model U.N. and public speaking programs, all of which, under his tutelage, became the school’s most popular activities and distinguished R.L. in competitions, nationally and internationally, leaving the school (in a retirement tribute in 1998 by a fellow faculty member) “an empire and a dynasty which are glory of the School and the admiration of the world.” Among other notable tributes when Phil retired in 1998, he was described as “a towering intellect” and “one of the truly great minds on (the R.L.) faculty.”

Equally important to Phil was the positive impact he had on hundreds of students who engaged in his classes and the aforementioned extracurricular activities. His retirement tribute included many accolades from grateful former students: “a positive driving force in my life.” And another: “his relentless efforts to teach, discipline and advice … are testament to the devotion, dedication and loyalty he possesses.”

He was particularly adept at nurturing the academic and personal lives of students who struggled. Said one former student: “He never seemed to be afraid of the worst in a student and approached his frailties with uncommon humanity.” In addition to teaching and mentoring R.L. students, Phil served as a foster parent for at-risk youth referred to him by the Massachusetts Department of Youth Services.

His compassion and commitment to social justice were evident early on. As a student at Bowdoin College, he became involved in the civil rights movement, was instrumental in establishing a student exchange program with Morehouse College and in bringing Dr. Martin Luther King to the Bowdoin campus for an address to the student body and community at large. For these activities, Phil was awarded the Franklin Delano Roosevelt Prize presented to the student “whose vision, humanity, and courage most contribute to making Bowdoin a better college” and was commemorated, in 2014, in the Bowdoin convocation as an inspiration to current students.

He also worked with inner-city youth groups in the New York City area while a student at Union Theological Seminary. In retirement, he volunteered on the Jefferson School Committee, as the Bowdoin debate coach, and for LGTBQ support groups.

Phil is survived by his siblings, Judith Hansen, and Mark Hansen and wife Phyllis Weinstock; nephews, Justin King and Jeremy and Noah Hansen; stepbrothers, John, Jeff, Gary, and Eric Olsen; foster son, Scott Wilson; and numerous cousins. A memorial gathering will be held in the fall.

The family appreciates the compassionate care provided by the staff at The Landing at Saco Bay and Beacon Hospice.