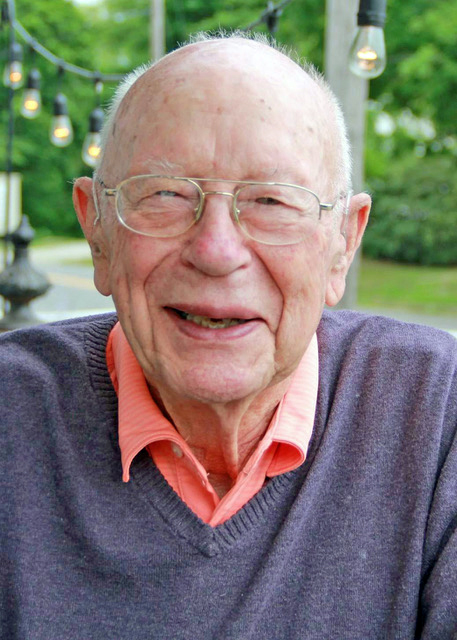 Philip J. Cameron, 91, of Chamberlain, passed away peacefully Friday afternoon, Jan. 22, 2021 at The Lincoln Home in Newcastle, surrounded by his loving children. He was born on June 30, 1929 in Waterville, the son of Philip and Alicia (Sweeney) Cameron.

A graduate of Lawrence High School in Fairfield, Class of 1947, he attended the University of Maine at Orono and Syracuse University, obtaining a master’s degree in education. After serving as a sergeant in the U.S. Army during the Korean War, he began his teaching career in 1954 in Madawaska. From 1959 to 1968, he was guidance director and principal at Rockland High School. In 1968, he became the guidance director at Waterville High School, moving on to Winslow High School in 1972 and retiring from there in 1989. In those years, he dedicated his life to education and touched thousands of students, helping them to choose appropriate high school courses, find the best colleges and obtain necessary financial aid, and prepare for successful employment and life after high school.

Philip was married to his high school sweetheart, Annette (Begin) Cameron, for 65 years and was heartbroken when Annette passed away on Feb. 3, 2017. Philip and Annette spent their retirement years at their home in Chamberlain with many winters in Lakeland, Fla. His greatest happiness was spending time with his children, their spouses, and grandchildren. He loved being by the ocean in Chamberlain, history, taking walks, golfing, and talking politics and sports (especially his beloved Yankees) with family and friends. He was a passionate reader his entire life and amassed an expansive library of political, historical, sports-related, and Maine coastal books, among other subjects. Philip was an avid gardener and would frequently be seen tending his beautiful rock garden at his home.

He is survived by his six children: daughter, Nora and her husband Denis Hanson of Cambridge, Mass.; son, Philip and his wife Robin of Westfield, Mass., and their sons Andrew and wife Meg Mill and Gregory and partner Annie McNair; son, David and his wife Jane Markham of Chicago, Ill. and their daughters Mira and her wife Sasha Williams, and Julia; son, Steven and his wife Anna of Lansdale, Pa. and their sons Steven Jr. and his partner Alyssa Giannone, and Anthony and his wife, Julia Aquilino; daughter, Kathleen of Arlington, Va., and her son Cameron Young; and son, Michael of Barnegat Light, N.J. and his daughter Alexandra Morang; as well as many nieces and nephews. He was predeceased by a sister, Lenora McMahon; a brother, John Cameron; and a son-in-law, Anthony Young.

Phil happily lived the last five years of his life at The Lincoln Home, where he was very active, a kind friend to everyone, and beloved by residents and staff. The Cameron family is truly grateful and warmly thanks the staff and residents for the wonderful care and love that Phil received throughout his stay there and especially during his short illness. The Lincoln Home was truly a home for Phil after his wife Annette, the love of his life, also passed away there in 2017. The family is especially grateful for the doctors and nurses at LincolnHealth – Miles Campus and Beacon Hospice for the wonderful care provided with dignity, honor, and comfort during Philip’s last days.

A Mass of Christian burial will be celebrated in the spring at St. Patrick’s Church in Newcastle. Donations may be made in Mr. Cameron’s memory to The Lincoln Home, 22 River Road, Newcastle, ME 04553; or to the New Harbor Food Pantry, 8 Southside Road, New Harbor, ME 04554.

Arrangements are under the direction and care of the Strong-Hancock Funeral Home, 612 Main St., Damariscotta. Condolences, and messages for the family, may be expressed by visiting stronghancock.com.