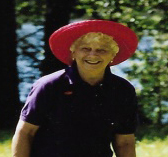 Phyllis Baldwin, formerly of Bremen and Damariscotta, died in Vermont on Jan. 19, 2020, in the presence of her daughter, after a long illness precipitated by a series of strokes.

Phyllis and her husband Richard retired to Bremen in 1982, where they flourished for more than 20 years in the company of wonderful neighbors and friends.

Phyllis was an active member of the Second Congregational Church in Newcastle, and served on various committees.

She was a founding member and life member of the Bremen Historical Society.

She was a member of the Bremen Library Board of Directors, the Coastal Crimson Mad Hatters and the Bremen Comprehensive Plan Committee.

She was a past secretary of People to People.

She was a member of the Maine Wood Carvers Association and was active in the Coastal Carvers Chapter.

Phyllis and Richard moved to Damariscotta in 2006. Several years following Richards’s death, Phyllis moved to Vermont to be near her daughter. Phyllis spent her final years in an environment where she was surrounded by love.

Phyllis is survived by her two children and by numerous nieces and nephews.

Phyllis’s qualities of warmth, wit, generosity and feisty spirit, shined even more brightly as she dealt with her final illness with grace and dignity.

She was a class act.

Arrangements were in the care of the Pruneau-Polli Funeral Home, 58 Summer St., Barre, Vt.