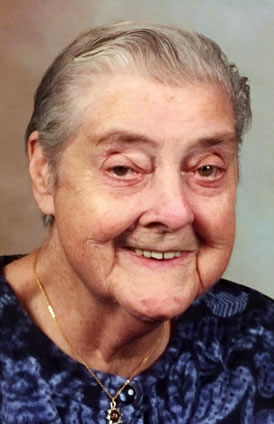 Priscilla M. Hatch, 91, of So. China, formerly of So. Jefferson, died April 23 at Country Manor Nursing Home, Whitefield, after a long illness.

Priscilla was born on July 3, 1926 the daughter of Sewall Waltz and Irene (Robinson) Waltz. She was always proud to say she was the oldest of their 11 children.

She grew up in Damariscotta Mills and attended local schools, graduating from Lincoln Academy class of 1945. On May 17, 1945, she married Richard L. Hatch and moved to the Hatch family farm in Jefferson where they raised their two children Roger and Bonnie.

Priscilla worked for Senters Department Store and other various brief part time jobs in the community but was most proud to say she was the first clerk hired by R.H. Reny when he opened his first store in Damariscotta. She was a hard worker and spent most of her life at the homestead raising and selling vegetables with her husband and helping raise her grandchildren. Priscilla’s hobbies included flower gardening, sewing, crocheting, cooking, and having most likely the largest collection of skunks in the state.

There are no planned visiting hours per Priscilla’s wishes. A graveside service is being coordinated by the family for 10 a.m., Thurs., May 17 at Trask Lawn Cemetery, South Clary Road, Jefferson.