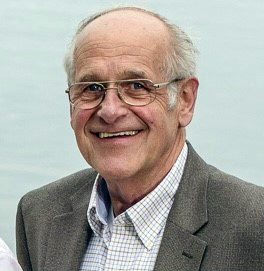 Randall Clark Lee, 75, peacefully passed away on Dec. 19, 2022 surrounded by his family. Born Dec. 26, 1946 in Damariscotta, he was the second of four children born to Clarence and Frances (Cook) Lee.

Randy grew up in Waldoboro and attended local schools. He enlisted in the Navy in 1963 where he supervised repairs to boilers aboard the USS Tidewater while touring the Mediterranean. Upon returning from the Navy, he gained employment at Bath Iron Works. After 20-plus years of faithful service at BIW, Randy retired as assistant foreman in Department 09. He went on several trips overseas for BIW while maintaining Navy ships. Randy enjoyed his job and was well liked by his coworkers.

After retiring from BIW he finished off his own 35-foot lobster boat LAST DATE and lobstered out of Friendship Harbor for several years. He loved working with his grandchildren on the boat and was known for his patience in teaching them to drive and haul traps. Throughout his life of accomplishments there was nothing he couldn’t build or fix, for example building his own homes, finishing off boats, working on engines, boat models and leather works. His work ethic, easy-going nature, knowledge, experience and patience are but a few of his notable attributes. He is going to be greatly missed. Randy enjoyed helping others. He also enjoyed cooking and picking crabmeat. His signature gift was his famous apple pies.

Randy is survived by his longtime companion, Mary Lee Melvin. They worked, traveled and enjoyed life together for 32-plus years. He is also survived by his two sons, Bubba Lee and his wife, Laurie, and Jason Lee and his wife, Crystal, all of Friendship. Randy had five grandchildren, Jacob Lee and wife Ashley, Rachel Bowman and husband, Wyatt, Joshua Lee and wife, Kelsie, and Daisy Lee and Jason (Buster) Lee, all of Friendship. He had several great-grandchildren as well.

He is also survived by Mary Lee’s son, Glen Melvin; his son and daughter, Zachary and Shania; daughter, Charise Melvin, and her son, Jayson, and their families. He was predeceased by his older sister, Pauline and survived by his sisters, Nancy Merrifield and husband, Elden of St. Albans, and sister, Geraldine Gowlis of Hookset, N.H.

A celebration of life gathering for friends and family will be held at 4 p.m. on Tuesday, Jan. 3, 2023 at the Hahn Community Center in Friendship.

You are invited to share your condolences and memories with the family by visiting their book of memories at hallfuneralhomes.com.