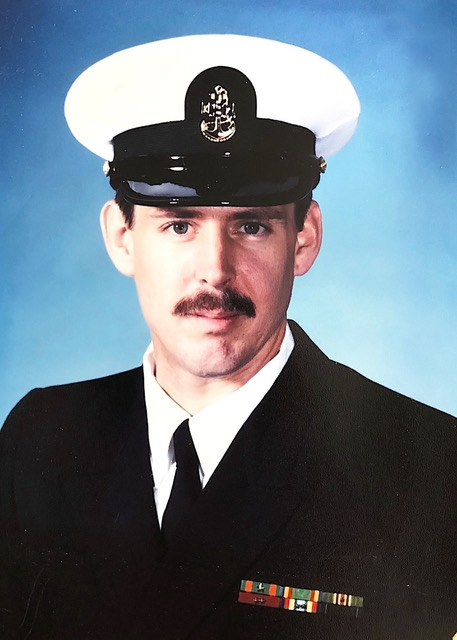 He grew up in the suburb of Bothell, Wash. and graduated from Inglemoor High School in 1976. Immediately upon graduation, he joined the U.S. Navy. He served 10 years on active duty and 16 years as a reservist in VP8 and VP92, attaining the rank of Chief Petty Officer. He retained a lifelong respect for the military.

While stationed at Brunswick Naval Air Station, he met his wife, Marie. They married on July 12, 1980 and would have celebrated their 40th anniversary soon. They spent their entire married life living in Alna. Their daughter, Kimberly, was born in 1982, and their daughter, Courtney, in 1986. During their childhood he coached many of their sports teams, including: T-ball, cross-country, basketball, and skiing. Rex was an avid athlete. He especially enjoyed running, cycling, and golf. His favorite football team was the Patriots, and he had an ongoing “rivalry” with his Eagles fan son-in-law, Matt.

After leaving the Navy, he became a computer programmer for contractors supporting SupShips in Bath. When computers were first introduced to the public, he quickly developed an interest in technology.

He was a talented woodworker and made many beautiful items for his family. Rex was known as “Mr. Fix-It”; there was nothing that he couldn’t assemble or repair. He also enjoyed master-level sudokus and completing jigsaw puzzles with his wife. Because his mother died of cancer, he donated blood platelets for many years. He recently became a screener for the local Red Cross donation centers. He adored being Papa to his five grandchildren and loved playing with them, as he was a big kid at heart.

Besides his parents, he was predeceased by his brother, Raymond Jr.

He is survived by his wife, Marie, of Alna; his two daughters, Kimberly and husband Michael MacLeod of Williamsburg, Va., and Courtney and husband Matthew Kaiser of Crofton, Md.; five grandchildren, Tobiah, Elizabeth, Hannah, Riley, and Willa; three sisters, Bonnie of Everett, Wash., Victoria of Woodinville, Wash., and Laura of Canton, Mich.; as well as many nieces and nephews.

There will be a private graveside service now for his family, and a funeral when large gatherings are once again permitted.