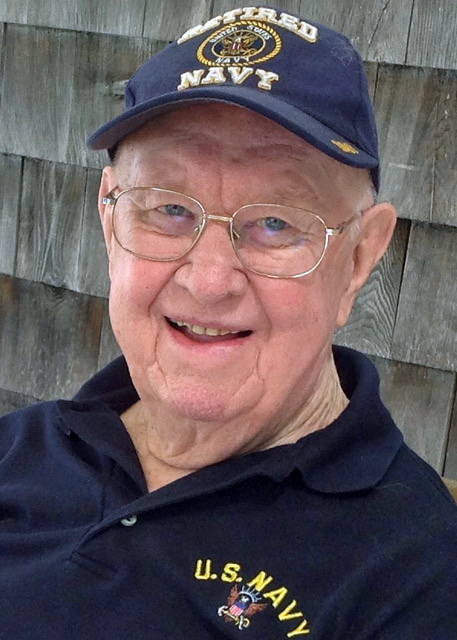 Richard Alley Jr., 94, of Warner, N.H., passed away peacefully with his loving family embracing him at his home on July 2, 2020. Richard was born in South Bristol on June 18, 1926, the son of Richard (Sr.) and Thelma Alley. He was a 23-year veteran of the United States Navy and served from 1944 to 1966. He proudly served in World War II, the Korean War, and Vietnam. After retiring from the Navy, he met his true love, Evelyn, married, and moved to Auburn, N.H. He worked many years at Sander’s Associates, Manchester and retired again.

Richard enjoyed retirement with Evelyn; together they took a road trip to California, watched Little League games, followed the Red Sox, and enjoyed taking long rides, being with family and friends, and making his infamous peanut butter fudge, delivering it to all the people who were special to them.

He moved to Warner, N.H. with his daughter, Jane, six years ago and enjoyed going out to lunch, visiting friends and family, going to Maine, and hanging with the cats and dog. He attended his first Red Sox game at the age of 88. He loved making fudge with his great-grandson, Jonathan, and watching the game network with his great-granddaughters, Aleks and Chloe. He loved spending time with his favorite nurse, granddaughter, Tonya, and watching the Red Sox with Jon and Frankie, as well as hearing his favorite angelic voice of granddaughter Trisha. He truly enjoyed his time with his son-in-law Darryl, having cigars and Twisted Tea.

In addition to his parents, Richard was predeceased by his wife, Evelyn (2004); and his brother, William Alley.