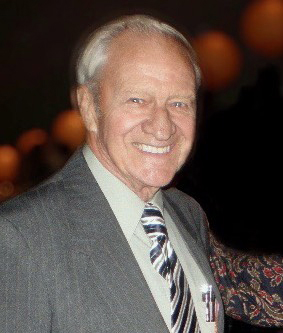 Richard Arnold Verney, 89, of Alna, passed away peacefully at Togus VA Hospital in Augusta on the morning of June 22, 2019 after a brief illness.

Richard was born Sept. 29, 1929, in Gardiner to John and Selena (Gilbey) Verney of Sheepscot Village. He was one of seven children. Richard attended Lincoln Academy and then joined the Army during the Korean War, serving his country in Labrador, Canada as a crane operator.

On July 25, 1954, Richard married Phyllis Herald. They bought their first home in Alna where they raised their four children. Richard then started his own business logging, selling firewood, and sawing timber at his sawmill on Verney Mill Road. This is where he acquired the nickname “Logroller.” When he was not in the woods or sawing, Richard could be found driving the school bus for Wiscasset and Alna. The school kids loved to see him pulling up at their bus stop as he was a favorite driver of theirs.

Richard enjoyed working on antique engines. He was as an avid member of the Maine Antique Power Association and could be found at many engines shows, parades, and country fairs with his engines and monkeys on display, even traveling as far away as New Brunswick, Canada, and Orange, Mass. in his camper to take part in engine shows.

In 1997 Richard and his three sons built their family camp in North New Portland from lumber he sawed out. “The Verney Weekend Retreat” became a favorite spot for snowmobiling and family get-togethers and holds many cherished memories.

For fun, Richard built a camp on the snowmobile trail behind his house named “1 Mile Kamp.” This has become the local gathering spot for snowmobilers and will continue to be enjoyed for many years to come. Richard was also a lifetime member of the Garrison Hill Grange in Sheepscot and the Wiscasset American Legion.

Special thanks to his caregivers Ruthie and Harley.

Relatives and friends are invited to join the family for a service to celebrate Richard’s life at 11 o’clock a.m. on Thursday morning, June 27 at the Hill Church on the Sheepscot Road in Newcastle with a gathering following at the Sheepscot Clubhouse.

Should friends so desire, donations may be made in Richard’s memory to the Alna Snowmobile Club, 1220 Alna Road, Alna, ME 04535.