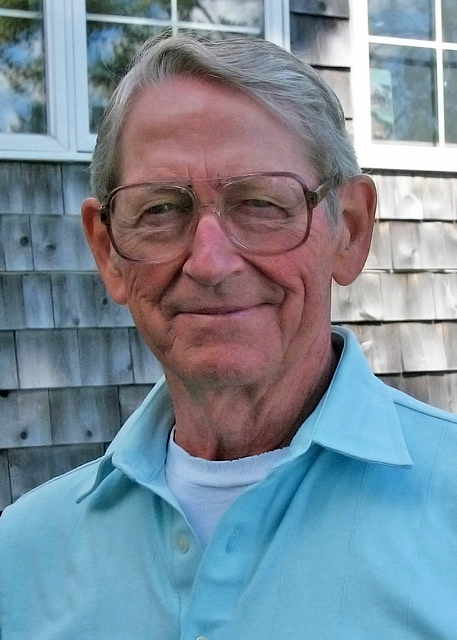 After a brief illness, Richard Dennett Reid passed away on the afternoon of Nov. 10, 2020, surrounded by family, holding the hand of the love of his life, Millie, his wife with whom he celebrated their 72nd wedding anniversary just days before. He was 93.

Known as Dick to his family and many friends, he was born on Oct. 2, 1927 in South Freeport to Arthur Reid, a boat builder, and Harriet Skagen Reid, an immigrant from Norway. He was the youngest of nine children.

Dick’s family moved several times throughout Depression-era Maine, but he spent the most, and the most fondly remembered, years of his youth in Wiscasset, where he made lifelong friends and graduated from Wiscasset High School in 1944. As soon as he was eligible, he enlisted in the Navy, where he trained as a radio gunner in high-altitude, heavy bombers. He was in a station in Washington, D.C., waiting for the train that would take him to his first deployment, when news came over the loudspeakers about the surrender of Japan.

While on leave in the summer of 1945, he went with a friend to a dance at the Edgecomb town hall and immediately caught sight of Millie Sherman across the room. From the moment he stepped up and asked her to dance, neither had the slightest doubt they had met “the one.” From this point on, Dick’s story becomes Dick and Millie’s story.

They were married on Oct. 21, 1948 and left immediately for St. Petersburg, Fla. in a 1937 Chevy sedan with the princely sum of $43 and their dreams. In St. Pete, Dick worked in construction for his stepfather, Hans Jensen, building bridges, beachfront hotels, and a school for the blind.

In 1951, Dick and Millie moved to Acton, Mass., where Dick took over the management of his brother-in-law’s manufacturing business, cutting wooden wedges for the construction of transformers. His innovations with the process increased the shop’s productivity by more than 3,000%. This creativity and sense of practical design would make its greatest mark when he collaborated with his nephew, Jesse Ward, and his brother, John Reid, to invent and patent a series of electronic tools for commercial manufacturing, including thermal wire strippers and resistance soldering tweezers. These tools would quickly become the standard demanded by the aircraft manufacturing industry, utilized by several large companies, including Raytheon and Boeing in work done for NASA’s space program. Their company, Contact Inc., would sell to everyone from NASA itself to model railroad builders.

In the meantime, Millie and Dick made several moves — to New Ipswich, N.H., Pepperell, Mass., Kingston and Londonderry, N.H. — even as their family expanded with the arrivals of Terri, Rick, Van, and Cassie. In each place they lived they made lifelong friends.

In the early 60s, Dick and Millie bought a summer home in Sheepscot. The house, the village, and their neighbors provided the family many golden summers and picture postcard winter vacations. They moved permanently to Sheepscot in 1971.

In the early ’90s, Dick began to refurbish and rebuild the Edgecomb farmhouse where Millie had grown up. They moved into the homestead in 1995.

“Nothing I ever accomplished would mean a thing without my family,” he once said, and he was certainly a devoted son and brother; loyal and gracious friend; beloved husband, father, grandfather, and great-grandfather; esteemed uncle; and more mentor and guide than just employer to many who worked for him.

Dick Reid engendered confidence and regard at the first handshake and always lived up to them. A man who had been a friend of Dad’s for years once said, “I knew when I met him for the first time that this man would be my trusted friend, and I’ve never met anyone like that since.”

Builder, inventor, shrewd but honest businessman, a man of many talents, and a man who loved to laugh — the people who benefited from the wisdom and generosity of Dick and Millie will probably never be counted, largely because when they gave, helped, or supported, they never spoke of it.

Dick was a member of the Boothbay Region Country Club for years. In 1972 and 1974, he had two holes-in-one, both on the seventh hole. He consistently shot under his age. Dick formed many friendships on the golf course.

He was predeceased by his siblings; his grandson, Christopher Benner; and great-grandson, Gavin Reid Dennison.

A celebration of life will be held this summer. In lieu of flowers, a random act of kindness would suit Dick fine.