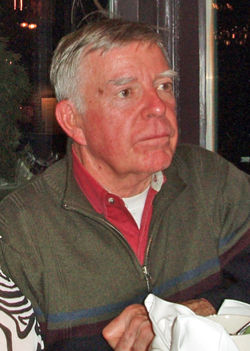 Robert Alexander Norton, 82, of Damariscotta, passed away Oct. 28 at the Maine Veterans Home in Augusta. Born on Jan. 13, 1934 in Beverly, Mass., he was a son of the late Joseph P. and Marjory (Macaulay) Norton.

Robert grew up in Marblehead, Mass., and graduated from Brown University in 1956. Following graduation, he served honorably for three years as an officer in the U.S. Navy.

On Jan. 24, 1959, he married Catherine “Kitty” Dittmar in Milwaukee, Wis. He joined his older brother and father in the family business, Eastern Industrial Oil, supplying oils and chemicals to the leather industry, nationally and worldwide.

Robert was an avid sailor, starting at five years of age, when he crewed for his sister, racing Townies in Marblehead Harbor. His love of sailing only intensified throughout his life. While serving in the Navy, he managed all the sailboats at the U.S. Naval Academy. He raced a Finn in the 1968 Final Olympic Trials. While living in the midwest early in his business career, Robert raced E-scows and iceboats. Moving back to Marblehead, Robert raced the One Design Etchells and various PHRF boats.

Robert also loved skiing and hockey, both sports he passed on to his six children – all good skiers and hockey players. Robert was an active board member in the YMCA, both in Marblehead and Boothbay Harbor. He was active in the Boston Yacht Club and the Boothbay Harbor Yacht Club.

Everyone who met Bob found a friend. He was respected and adored by wife, children and family.

In addition to his parents, he was preceded in death by his brother, A. Vernon Norton.

Relatives and friends are invited to join the family for a service to celebrate Robert’s life at 11 a.m., Mon., Oct. 31 at the Congregational Church of Edgecomb, 15 Cross Point Rd., Edgecomb.