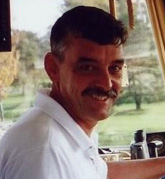 For a ship captain who was active his entire life until recent years, the loss of his captain’s license due to the heart disease was a terrible blow. Despite that he fought on and took comfort and found purpose as a home chef, often amazing his wife Susan’s co-workers with his gourmet lunches. In Summerville he loved his birds and flowers as he became more house-bound. Bob called himself an “accidental Yankee” who found peace and joy in his adopted hometown of Summerville, S.C.

Born Dec. 23, 1952 in Providence, R.I., he was the son of Dorothy Farrell Gifford of Columbia, Conn., and the late Fred B. Gifford. His maternal grandmother was Marion Humphrey Farrell Cundy of Monhegan. Marion Cundy opened her home, the Cundy Cottage, to travelers to the island for meals for many years. Through Marion’s mother Violetta, Bob shared the heritage of the Trefethens, who settled on Monhegan in the 1700s, and through Violetta’s husband William, he was a descendant of the many Humphreys who settled Bremen and Bristol. As a child, Bob spent many weeks every summer, and some winters, on Monhegan.

Bob’s first shipboard job came at the end of his senior year in high school. While his class was attending graduation he was already at sea. In between years of attending the University of Connecticut, Bob passed the Coast Guard exams for his first Captain’s license in January 1973.

Traveling from northern Canada to South America, and the Caribbean to Alaska, Bob’s life was truly blessed, with the beauty of our world and the friends he made.

In 2002, Bob’s maritime career took him to one of the oldest companies in Rhode Island, as he became a ship’s agent and found new and exciting challenges in dealing with ships, crews, cargos and passengers from all over the world. Bob excelled in this work and enjoyed it greatly until heart disease forced his retirement in late summer of 2011.

In addition to his mother, Bob is survived by his wife Susan and daughter Hannah of Summerville, S.C.; son, Matthew (Jillian); grandsons, Pierce, Bretton and Elton; and daughter Rebecca, all of Seekonk, Mass.; and Matthew and Rebecca’s mother, Laurie MacLeod of Barrington, R.I. Bob is also survived by his sister, Martha Gifford (James Daniels) of Brooklyn, N.Y. and Bristol; brother, Stephen of Columbia, Conn.; his aunt, Elizabeth Peterson of Barrington, R.I.; and several cousins, nieces and nephews.

Funeral services were held May 9 at St. Paul’s Anglican Church of Summerville, S.C. with interment of his ashes at the Chapel of the Palms, Camp St. Christopher, Seabrook Island, S.C., a place where Bob found peace with the Lord. His ashes rest among the dunes at the mouth of the North Edisto River, looking out to sea. For Bob’s many friends and family in the New England area a memorial service was held June 22 at the Chapel by the Sea, Colt State Park, Bristol, R.I.

Donations in Bob’s memory may be made to the Men’s Christian Conference of the Anglican Diocese of South Carolina, which had such a profound effect on his spiritual strength: CMC Scholarship Fund, in memory of Robert F. Gifford, c/o St. Christopher Camp & Conference Ctr., 2810 Seabrook Island Rd., John’s Island, SC 29455.