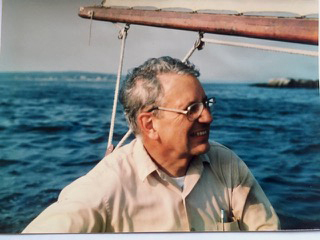 Early in the morning of May 17, 2019, Robert W. Gatcombe left us on the ebbing tide after a long illness. He died peacefully at home. Robert had been in the care of Northern Light Home Care and Hospice for over a year.

Robert was born on July 1, 1928, at St. Barnabas Hospital in Portland to Fred Crawford Gatcombe and Ella J. Gatcombe. He grew up in Rockland during the Great Depression and spent summers helping his grandparents at their home in New Harbor. He enjoyed sailing with his younger brother, John, and was a Sea Scout. He graduated from Rockland High School and went to college at the University of Maine at Orono where he graduated with an engineering degree in 1950. He later received a Master’s degree in business administration from Northeastern University.

Robert had joined ROTC and served in the Army in Labrador during the Korean War. Following his active service, he continued to serve in the Army Reserves for many years, retiring as a Colonel.

On Oct. 12, 1952, Robert married Lois Marie Benner. They had two children, Leslie Ann and Steven Brian. The family lived in Massachusetts and returned to Maine in 1966. Robert worked for General Electric and IBM working on computers back when punch cards were used for data entry. After leaving IBM he worked at Madison Paper and Kassbohrer of North America before retiring.

Robert enjoyed working at the family homestead, Hillcrest Farm, three seasons of the year until he was physically unable to continue. He enjoyed sailing, dancing, boating, maintaining the farm, reading science fiction and listening to music. He spent time with his family and good friends who remember lobster bakes on the shore and boat rides in the Wicked Good.

Robert is survived by his wife Lois B. Gatcombe of Cumberland; his brother, John L. and his wife Joanne Gatcombe of Waldoboro; his daughter, Leslie Gatcombe-Hynes of South Portland; his son and daughter-in-law, Steven and Kristel Gatcombe of Peterborough, N.H.; granddaughters, Nyssa Marie Gatcombe, and Alicia Ann Hynes; multiple nieces and nephews, their families; and several cousins.

A celebration of his life will be held on Saturday, May 25 at 1 p.m. at the Tuttle Road United Methodist Church in Cumberland. Robert donated his body to the University of New England and the committal service will be held at a later date at Brooklawn Memorial Park in Portland.

In lieu of flowers donations may be made to the charity of your choice.