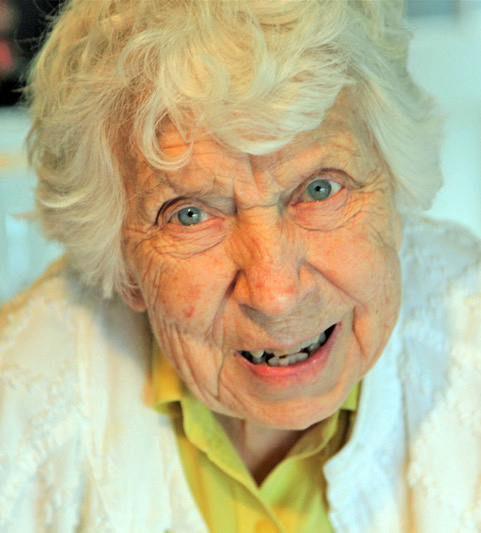 Roslyn E. Strong, aged 100, died on Nov. 30, 2020 in Boothbay Harbor. Born on Sept. 12, 1920, she was the only child of Andre Pignard and Chloe (Murillon) Pignard in North Bergen, N.J. She graduated from Textile High School in New York City (now known as FIT), where her father taught color theory and screen printing. In the 1940s Ros opened a textile studio in New York City’s Garment District called Maison Andren, producing hand-dyed silk neckties and other apparel.

She married Harris G. Strong in 1949 and they started Harris G. Strong Inc. in 1952 in the Bronx. In the ’50s they produced mainly ceramics (lamps, tiles, etc.), but in the ’60s through the ’80s, they shifted to modernist wall hangings. The business remained in the Bronx, but the family moved from New York City to Eastchester, N.Y., then to Scarsdale, N.Y. In 1969 they moved the business to Trenton and lived in Bar Harbor. Ros started the Strong Craft Gallery at the Trenton location, featuring Maine craftspeople.

Ros was always interested in Neolithic culture in France and England, and after she moved to Edgecomb in 1985, she pursued these interests and began researching early stone structures in New England. Together with Sue Carlson, she was very active in the New England Antiquities Research Association. As members and officers, they edited the journal, and organized meetings and field trips. In the 1990s she founded Journeys Around Ancient France and organized bus tours for Americans visiting enigmatic ancient archaeological sites in France.

Skillful and adventurous in the kitchen, Ros could cook the traditional French fare but also many world cuisines. It was a rare phone call where a recipe was not discussed at some point.

Ros celebrated her 100th birthday while still living in her house in Edgecomb (by Zoom mainly). Shortly after, she moved to St. Andrews Village in Boothbay Harbor.

Survivors include her partner of many years, Suzanne Carlson of Boothbay Harbor; two sons and their wives, Matthew and Peggy Strong of Ellsworth, and Andre Strong and Marjorie Kernan of Blue Hill; granddaughter, Jennifer Hill (Shane Hill) of Sydney, Australia; and a great-granddaughter, Jessica.

A memorial service will be held at some time in the future, after we are all able to gather together safely.