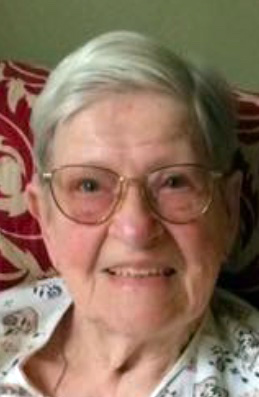 She grew up on a farm in Nobleboro with her mother and brother, often recounting stories of driving her oxen team in the fields and ice skating on the nearby lake with friends. She attended school through 8th grade and continued work on the farm during her teen years.

She worked much of her life, notably as a telephone operator (when the operator actually connected the call) and as a longtime employee of Briggs Pharmacy in Damariscotta. She continued employment during the changing of ownership/location and retired some years later.

Ruth and her husband, Willie, lived on Lewis Point in Damariscotta and enjoyed the view of the Damariscotta River from their back deck. When he passed in 2000, she moved to a new home in Nobleboro until May of this year, when she relocated to Hodgdon Green Assisted Living.

During her short stay at the Green, she enjoyed having the support of the staff, a sense of community during mealtimes, and visited with new friends. She frequently called friends and family to stay connected.

She was an avid reader, loved watching westerns, and enjoyed knitting and needlepoint. Her grandchildren enjoyed many matching sets of hats, mittens, and sweaters growing up. In recent years, the mittens she knitted were often donated to a local food pantry. She was also civic minded and valued her right to vote. She participated in voting by mail, including the most recent election. Her opinion of the candidates was not hard to miss if the topic came up.

She is survived by her son, Alfred Little; grandchildren, Scott Little, Nicole Little, and David Little Jr.; daughter-in-law, Sarah Elwell; as well as many great-grandchildren, nephews, and nieces.

There will be a private family burial where Ruth will be laid to rest next to her mother. In lieu of flowers, please consider donations in her memory to your local animal shelter.