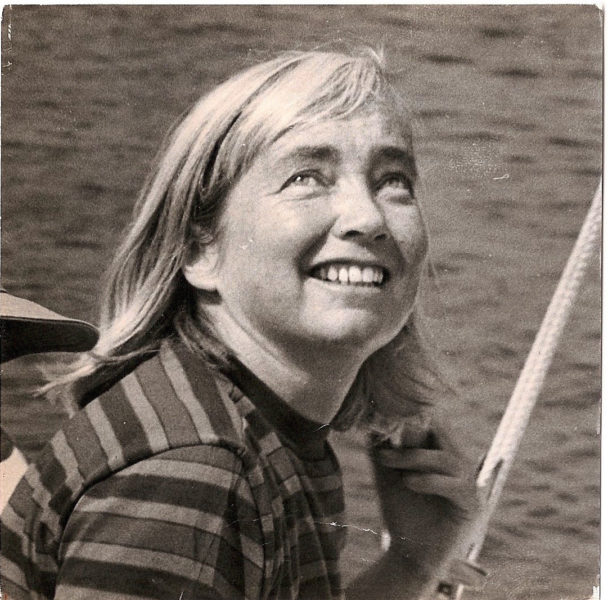 Years before her death on Nov. 15, Sally Cartwright, of Tenants Harbor, wrote that someday, she would “rust out.” She lost her keen awareness over time, but not her sense of humor, or her kind smile, or the sparkle of the sea in her blue eyes.

For most of her nearly 93 years, she nurtured creativity, cooperation and critical thinking in the children she taught. She would play her accordion as kids became trees, growing from saplings, stretching their branches upward. She believed in the human potential for good, and worked for inner as well as world peace.

She didn’t let convention or fear curb her abundant curiosity and sense of adventure, whether it was hiking past a no trespassing sign, sailing her sloop alone, or kissing her future husband on the college library steps. They were reprimanded by a dean.

A New York City native, born Nov. 25, 1923, Sally Willcox grew up in an artistic, competitive sailing family, first on Staten Island and later in Greenwich Village. Her creative spirit was nourished at the progressive City & Country School, and Lincoln High School. She graduated from Cornell University and earned her master’s degree in education at Bank Street College. She wrote a dozen science-based books for children, including Animal Homes, The Tide, Why Can’t You See the Wind?, Sand, Water is Wet, and What’s in a Map?

She married Cornell classmate Roger Cartwright in 1941, and after his military service, the couple worked in India for the American Friends Service Committee, bringing medicine to villagers. They met Gandhi, and in living like natives, caught malaria and dysentery. They also learned to speak fluent Bengali, a language Sally retained the rest of her life. After raising their children in Greenwich Village and Maine, Sally and Roger divorced.

Sally taught science at City & Country School, she ran the Watertown (Massachusetts) nursery school, and she founded her own place of learning, Community Nursery School, when she moved to the family summer home in Tenants Harbor. She loved living by the sea and sailing on it. In her 60s she took up windsurfing. In her blue 17-foot sailboat Sea Chip, Sally sailed the New England coast, often solo from Connecticut to Canada. She took children on sailing adventures from nearby Blueberry Cove Camp, where her two sons worked as counselors.

After her move to Tenants Harbor she enjoyed the company of close friends and a former stray cat, Skipper. For 10 years, she lived at Schooner Cove in Damariscotta, and then spent several years in Waldoboro and Camden. She was proud of her family, not only for their accomplishments but for who they were as individuals.

A spring celebration of Sally’s life is planned at Blueberry Cove in Tenants Harbor at a date to be announced.