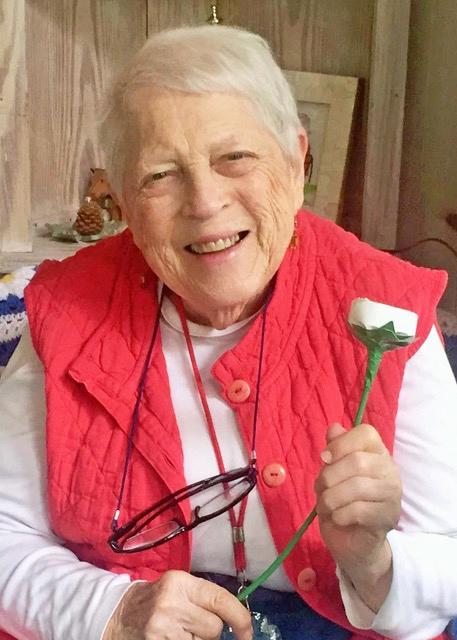 On May 26, 2020, as the fog lifted and the day’s sunlight cast rainbows throughout her favorite windows at home, Sally Chittenden (Deming) Robinson relinquished the frame she had often so valiantly preserved against all odds and that had kept her hospitalized since March, to join her growing circle of dear ones and her Creator for the Next Great Adventure. She had a substantial list of questions to ask upon arrival.

Those of us now bereft will remember her friendly inquisitions and even more notably, how intently she listened to our responses. For her, each stranger posed an opportunity for love, connection, healing, and the nurturing of dreams. Her wide circle of friends included people of all ages and persuasions. Sally and Bill’s home reassured visitors of their “welcome” through ample signage, and there was always an open invitation to her table. Celebration was her middle name, she had been told once, and it was true: she faithfully sent cards, letters, and emails; many have saved her “Sally Photo Cards” or handmade paper creations. Boxes full of surprises would be mailed out and children and adults alike would delve into the contents and wonder, “How did she know…?” She loved hosting holiday meals and had a caterer’s sense of timing to make it all come together. Summer visitors “from away” were often treated to a fresh lobster meal on the dock at the Medomak Lobster Co-op while she toted along her landlubber fare.

A former teacher, church administrative assistant, calligrapher, advertising and freelance artist, she for many years published the monthly Bremen Union Church newsletter, peppering it with thought-provoking passages and photos of church life. She conceived of, publicized, and participated in church suppers, sales, and services and decorated the hall with seasonal flair. The candles that glow in that church’s windows on Route 32 were once just a gleam in her eye. The Christmas Eve Bremen Church waffle buffet supper was one of her favorite brainchildren and has been a well-attended festivity for many years.

All this Spiritual creativity was the natural extension of 46 years of membership in the United Methodist Church in Skaneateles, N.Y., the town where she and her husband William raised their four children. Family was an inclusive term in Sally’s vocabulary and many regarded Sally as their “second” mother or grandmother or Bill as a “second” dad or mentor. Teddy bears dressed in holiday outfits, dolls, tiny children’s clothing and shoes, and vintage toys figured prominently in her home decor and visiting children might leave wearing a new outfit or adopting one of her bears. Any house they lived in had an art room or “busy room” for sewing, decorative painting, and other projects. Her remarkable decorative creative assemblages were supplied by thrift shop and yard sale finds. Sally and Bill have been part of the “yard sale community of friends” and she recently had donated her own sale proceeds to relief in Puerto Rico.

Sally had a strong sense of Jesus’ unconditional acceptance and social justice to the very end. She instilled a keen awareness of civil rights and was ever an eager student of those from different walks of life. Her daughter owned some of the first dolls of color in the admittedly monotonic suburban town, and Sally might consider the afternoon airing of “To Kill A Mockingbird” or “A Patch of Blue” sufficient reason to keep a young student home from school. “Fresh Air kids” were among her children’s playmates. Here in Maine, she and Bill enrolled in her dear friend Rabbi Shaw’s courses on Judaism at the Senior College. She kept abreast of the news and listened to diverse audiobooks. In recent years, her political activism took the form of witty, insightful poems and limericks on current events, shared via Facebook and email and periodically assembled into illustrated booklets—and counting.

Sally was raised in Elizabeth, N.J. by parents Robert Treat Deming and Adele Stickney Deming. Her father worked at Moody’s Investors in New York City and her grandfather worked as controller of Vermont Railways and also was an official of Panama Railways. Her mother was an immigrant from England and never forgot it; her maternal great-grandfather was an artist on both sides of the Atlantic. Her grandfather Burnham Coos Stickney was a New Hampshire man, a patent lawyer and inventor with Underwood-Elliot-Fisher typewriters. She had two older siblings, Robert Deming who served 30 years as a U.S. Air Force Chaplain, and Emily Specht (later Schroeder). In 1947, after graduating sixth in a class of 1,000 students at Battin High, Sally Deming attended Grove City College in Pennsylvania. It is not surprising that this extrovert was able to draw out the shy, handsome fellow college choir member and chemistry major from the farm, William Robinson. They were married on Sept. 3, 1950 and lived together for 70 years.

Sally’s family had summered for several weeks each year on the shores of Lake Champlain in Vermont, and upon retiring her parents had volunteered at the Trailside Museum in Summit, N.J. In the ’70s they had received a scholarship to the Audubon Preserve at Hog Island in Bremen. Adele (“Cookie”) was an avid recreational naturalist and poet in her own right and her life spanned three centuries, from 1899 to 2000. After caring for parents from both sides in Skaneateles until their passing, Sally and Bill took a chance and moved to Maine in 2002 to be nearer daughter Heather and family. Here their two homes were augmented with a year-round sunroom through which nature, the seasons, and feeding birds could be enjoyed, known as “Cookie’s room.” With assistance from Beacon Hospice and Nightingale Home Care, Sally’s final days were spent in this room surrounded by new spring foliage, flowers, sunlight, and visits of feathered friends – their first Baltimore orioles! – and the delightful birdsongs of their recently inherited finch, Pretty Bird. She received calls, visitors, messages, and listened to singing; and for a time, the precious gift of Julia Lane’s harp and voice filled the room from near the foot of her bed. She passed peacefully with Heather and Mary at her side at the age of 91.

Sally is survived by husband Bill of Waldoboro; and their sons, Mark and Dean and their spouses Roxanne and Amanda; daughter, Heather Elowe; “daughter-of-the-heart,” Mary Blatz and husband Andy Tanguay; and son, Christopher. Grandchildren include Rowan, Nathan, and Cory Elowe and their beloveds Cassie Baxter, Missy Boucher, and Emily Tong; Christina Scherrer, Jennifer Vandenbussche, and Stuart Robinson and their spouses Greg, Dieter, and Ronnie; Ashley and her partner Tyler (and her mother Melanie Spencer); Ian, and Julia with her love Daniel; and Eric, Brian, Ethan, and Rachel Tanguay; Bethany and Peter. She leaves eight great-grandchildren. She had also maintained a close rapport with several nieces and nephews and more distant relations. Sally bids leave to old friends from high school and Skaneateles and dear ones around the country, and her bright smile and conversation will be sorely missed here among the larger Midcoast community.

A memorial service will be announced for late summer or early fall overlooking the sea at Pemaquid Point Lighthouse.

Arrangements are under the direction and care of the Strong-Hancock Funeral Home, 612 Main St., Damariscotta. Condolences, and memories of Sally, are welcome and may be shared by visiting StrongHancock.com.