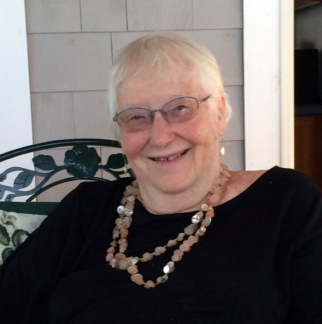 Sally Troy Currier Johns was born on Jan. 2, 1942 in Washington, D.C. to Prescott Hunt Currier and Edyth Patricia “Pat” Currier. Her father was in the Navy when she was born, and his assignments led to Sally’s lifetime love of traveling and exploring new places and cultures. As a child she lived in England and spent time with her mother’s relatives in Sussex. She also lived in Japan from 1952 to 1954 and went to secondary school in Switzerland.

In 1963, she received a Bachelor of Fine Arts degree from Lake Erie College in Ohio, focusing on theater and English. After a year as a production intern at Arena Stage in Washington, D.C., she lived in London for five years, working in theater, films, and advertising. She traveled all over Europe, developing a special love of Greece and Ireland.

Returning to Maryland in 1970, she studied at the Montessori Institute and received a diploma to teach primary classes (ages 2 1/2 to 7). She met and married Harry Johns and their son, Christopher, was born shortly before they moved to Atlanta, Ga. During the next 20 years, she taught classes and directed programs at Montessori schools in Atlanta and in Houston, Texas, and received her diploma to teach elementary classes (ages 6-12).

While in Houston, she studied classical languages and later in her life taught Latin and Greek to middle-school students. She continued to be fascinated by various religions and philosophies such as Sufism and Buddhism, and, in her trips to various countries, collected many beautiful artifacts which reflected her Christian beliefs as well as others.

From 1989-1994, she was head of the elementary department at Thatcher Montessori School in Milton, Mass. She then moved to Damariscotta to live with her father after the death of her mother and taught at the Montessori school there, as well as teaching and tutoring students at Lincoln Academy.

After fully retiring in 2008, she continued to take classes and became more involved with her friends in book clubs, knitting clubs, and religious discussion groups, staying in touch recently with Zoom meetings almost every day of the week. She was a member of the Benedictine Group and the Companions of the Holy Cross and was active at St. Andrew’s Episcopal Church. Her volunteer work included the local food bank, hospice, Spectrum Generations, Skidompha Library, and Literary Volunteers of America.

She is survived by her son, Christopher, and his wife, Meshell DeAngelis, of Asheville, N.C.; her brother, Colby, and his wife, Pat, of Brunswick; her niece, Kristin, and family; and her nephew, Andrew, and his family; numerous cousins in the United States and in England; and a multitude of friends.

Sally wanted to be remembered as being tolerant and accepting of all beings. A celebration of her life will be held at St. Andrew’s Episcopal Church in Newcastle on Thursday, Feb. 24 at 11 a.m.

Arrangements are in the care of Funeral Alternatives, 46 Bath Road, Brunswick.