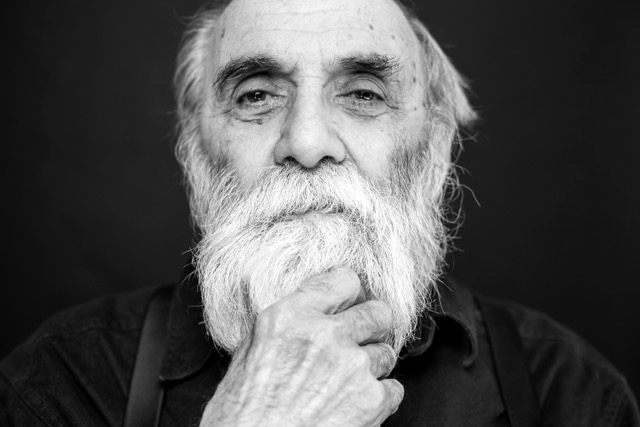 Samuel Aaron Kaymen died peacefully and full of grace in the warm embrace of his beloved wife and daughters on March 5, 2022 in Damariscotta. In the end, Samuel left this world as purposefully and confidently as he lived it. He died of pancreatic cancer. His passing leaves both a cavernous hollow and a well of gratitude within every living being who had the good fortune to know him. A dear family friend shared, “Samuel is a giant and his life should be sung about by bards.”

Samuel was truly a giant among us. He was an impassioned visionary, activist, advocate, and educator on behalf of the health of the planet and all of its inhabitants; a fervent and open-minded reader, thinker, farmer, gardener, and citizen of the natural world; a problem solver extraordinaire, woodworker, fixer-of-all-things broken, genius creator, and entrepreneur. Yet for all of his capacities, accomplishments, and notoriety, he was most profoundly moved and fulfilled by the riches and simplicity of life with his precious family. To his cherished grandchildren he was a guide: engaged and loving; to his darling children he was the anchor that moored their lives, encouraging and supporting them with wholehearted presence and devotion; and in a place beyond compare, traversing together the pinnacles and valleys of his worldly existence, he walked hand in hand with his beautifully devoted wife, very best friend and love of his life of 60 years, Louisa Kaymen.

He gave passionately and with abandon to every endeavor and everyone he encountered. Whenever asked what he wanted for his birthday his reply was unchanging: “world peace.” His brilliance, his heart, his life and work leave an indelibly profound mark on this earth and upon the people he met, knew, and loved. His reach was wide, his impact was deep, and his spirit lives on in the countless individuals around the globe who claim, “He changed my life.”

From his earliest childhood years, Samuel observed the world around him and charted his own path on his own terms. He was born on Feb. 8, 1936 in Brooklyn, N.Y. into a life of love, hardship and poverty. While attending high school and college he worked fulltime to support his family. Years later, in his retirement in Maine, Samuel was awarded an honorary doctorate in Agriculture, Food and Sustainability from Unity College.

Samuel served in the Air Force Reserve; he was the co-founder of Space White Industries; founder of the New England People’s Food Co-op; founder of the Natural Organic Farmers Association (currently Northeast Organic Farming Association); founder of The Rural Education Center, and founder of Stonyfield Farm Inc. (currently known as Stonyfield). His fearless leadership was born in the 1960s when he found his “inner compass.” By the early 1970s he was a pioneer of the organic farming and sustainability movement in the Northeast. His genius spilled forth and the rest of the world sprinted to keep up. He gave his time and attention generously and selflessly and, in the later part of his life, philanthropically as well. Of the numerous organizations that Samuel supported he served on the board of the Biodynamic Farmers and Gardeners Association, Earth University Foundation, Sustainable Harvest International, and ElderCare Network of Lincoln County.

To know and work with Samuel was to be inspired forever forward. He had an infectious way about him, harnessing the inspiration that ran through him like a fast flowing river. From his own imagination he generated so many forces for positive change and good in the world.

A former colleague at Stonyfield says, “Not only am I saddened to hear of Samuel’s passing – I’m surprised. I thought he would live forever!”

As the wind whirls through the trees that dot the shoreline of his earthly home in Maine, the world is weeping and undoubtedly mourning his passing. We can all take solace in the light that he left behind that burns brightly in each of our hearts.

He was predeceased by his parents, Frances Kantor Kaymen and Leonard Kaymen; his sister, Carolyn Kaymen; and his son, Scott Kaymen.

No service is planned at this time. A website (samuelkaymen.com) where tributes and memories may be posted is forthcoming.

In lieu of flowers, donations may be made in Samuel’s memory to the following organizations that were closest to his heart: Earth University; Sustainable Harvest International; and ElderCare Network of Lincoln County.