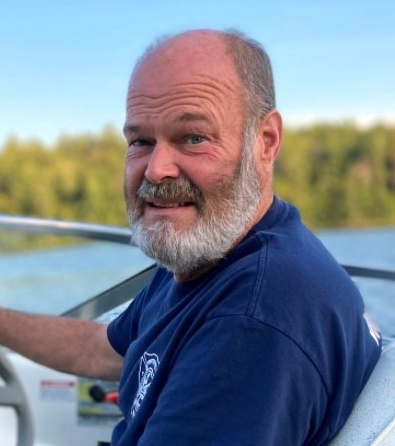 Scott grew up in Winthrop and was a graduate of Winthrop High School in the class of 1979. Influenced by his father’s career, Scott was deeply interested in aeronautics and attended college at Embry-Riddle Aeronautical University in Florida. Following his return to Maine, Scott married Kathryn Pond on Sept. 10, 1983, and the two settled in Winthrop. Scott was employed at Dave’s Appliance until 1988, when he ventured out on his own and began Higgins Appliance Service. Scott was a jack of all trades and could fix anything. In addition to owning his own business, Scott was also a bus driver for the Jefferson Village School for the past 23 years.

Although he carried many titles, being a family man was his true vocation. A loving husband, reliable father, and devoted “Grandpa” or “Grumpa” to his 14 grandchildren, family was very important to Scott. His favorite pastimes include boating and tubing on the lake, fishing, golfing, and just simply enjoying the Maine outdoors. He was a natural grill master and was most comfortable during summer barbecues with a cold beer in his hand, tending to the grill.

He was predeceased by his parents.

A period of public visitation will be held from 2-4 p.m. on Sunday, Oct. 23, at Plummer Funeral Home, 983 Ridge Road, Windsor, where a brief fireman’s service will begin at 4 p.m.

In lieu of flowers, memorial donations in Scott’s name may be made to Whitefield Fire Department, 36 Town House Road, Whitefield, ME 04353. Condolences, stories and photos may be shared by visiting plummerfh.com.