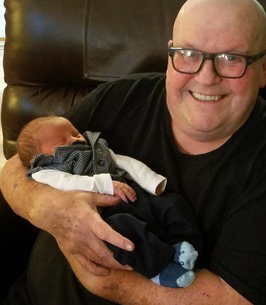 Steven “Tonkey” Douglas Thompson Sr., 63, of Warren, passed away peacefully at his home Dec. 15 with his beloved wife at his side.

Born in Waldoboro on April 4, 1954, Steven was the son of John Percy Thompson Sr. and Madeline Alberta Towers. He attended Medomak Valley High School before his two decades of service at the O’Hara Corporation delivering goods and making friends up and down the east coast of Maine and the Canadian provinces. Most notably, he captained the tugboat, “Seasmoke,” back and forth from the mainland to his home on Friendship Long Island. In his later years, Steven found great joy and pride in his work as a personal support specialist for Ask…for Home Care of South Thomaston where he provided compassionate care while singing and telling jokes to his residents.

Steven will be remembered for the love and laughter he brought to the world. As his favorite singer, Hank Williams, once said, “Don’t take life too seriously because you can’t get out alive anyhow.” His lighthearted, generous spirit touched the lives of all who knew him, and though his prowess at the poker table touched the wallets of most of his friends, he would give the last nickel he owned to anyone in need. Steven’s life made the world a little brighter, a whole lot kinder, and infinitely more fun.

Family and friends are invited to visit from 11 a.m. to 12 p.m., Fri., Dec. 22 at Burpee, Carpenter & Hutchins Funeral Home, 110 Limerock St., Rockland, where a celebration of Steven’s life will begin at 12 p.m. Pastor Tom Rawley will officiate.

In lieu of flowers, donations in memory of Steven D. Thompson may be made to Trekkers, Inc., 41 Buttermilk Dr., Thomaston, ME 04861; or the ASPCA by visiting www.aspca.org.