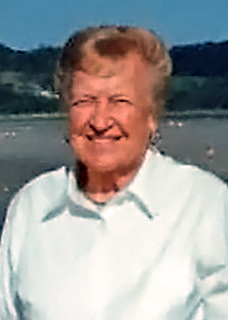 Mrs. Sylvia (Alexander) Martin, a resident of Camden, formerly of Alna, Maine, and Massachusetts, passed away peacefully on the morning of Nov. 19, 2021 at the age of 93.

Sylvia was born in Waltham, Mass. on Jan. 10, 1928, the daughter of the late Alfred and Fanny (Griffith) Alexander. She was raised in Waltham and graduated from Waltham High School class of 1947. Upon graduation, Sylvia was a recipient of an art scholarship to The Commercial Art School of Design, Boston, Mass. In the summers during this time she worked in Hyannis, Mass. where she met and in 1950 married Jerome Martin.

After graduating from art school Sylvia began working for Bachrach’s Photography Studio’s, Boston, Mass. She had fond memories of living on Commonwealth Avenue with Jerry as a newlywed couple.

Jerome, as a member of the Armed Forces, entitled Sylvia to travel and live in many places throughout the United States and Europe. She was her happiest when gardening, sewing, baking and entertaining. When she lived in Pepperell, Mass. she started her own business named Flintlock Florist. Sylvia had an intense love of animals, especially her cats Figiro, Tina-lena, and Gingie. Her dogs Rusty, Bently, and Martin were her favorite golden retrievers that greeted one and all when visiting her home.

In 1986, Sylvia and her husband Jerome moved to Alna, where they settled in a delightful Maine post and beam home situated on the Sheepscot River. After the passing of Jerome, Sylvia sold her picturesque home, and in 2016 moved to Quarry Hills in Camden.

Sylvia was the beloved wife of the late Jerome Martin (deceased in 1994), with whom she shared 44 years of marriage; and later Ralph Leeper (deceased in 2007). She was the devoted aunt of Judith E. Grogan and her husband Michael; Barbara E., Deborah E., Nancy A. Baldwin; Lawrence A. Baldwin and Herbert L Baldwin, Ill (deceased). Dear sister of Marjorie E. (Alexander) Baldwin (deceased) and numerous great nieces and nephews. Sylvia will also be fondly remembered by Ralph Leper’s family Rob, Regina, Roxana; as well as her true and dearest friend, Patti Averill of Alna.

A private graveside service will be held at the Sheepscot Cemetery.

In lieu of flowers, donations in Sylvia’s memory may be made to the charity of your choice.