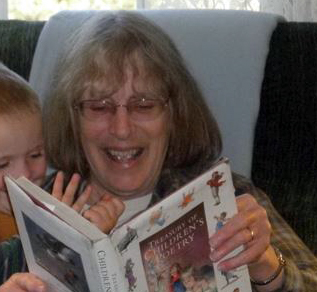 Theta, née Shirley M. Crane, passed away at the age of 76 at home on Sept. 22 in the arms of her husband of 49 years after a number of years of relentless physical and cognitive decline. She was born in Mountain Lakes, N.J., the fourth and youngest daughter of the late Ralph M. Crane, D.O., and the late Marion Louise (Wells) Crane. Her family relocated to California in 1948, and she grew up in San Anselmo, just north of San Francisco until she was 12, and lived in San Diego during her high school and college years.

Theta graduated from Manhattanville College in Purchase, N.Y. in 1968 with a B.A. in philosophy and went on to earn an M.A. in communications/film at Cal, State U., San Francisco in 1970. While there she established a biofeedback meditation business and changed her name to simply “Theta.”

Two years later, she sold her business, bought a property in Mendocino County and some dairy goats to go with it. There, her husband-to-be Jim Torbert met her and fell instantly in love with his gray-eyed Athena. He moved in with her on May 1, 1973, and they made the bond permanent exactly a year later. She and Jim managed commercial goat dairies in northern Arkansas and southern Maryland before moving to Maine in 1983.

Theta was a loving and devoted wife, mother, grandmother, sister, and aunt, just to begin with. She was also an artisanal fromagère, whose fresh and herbed goat cheese sold in stores from Belfast to Brunswick and were served in restaurants such as Slates in Hallowell and the Harraseeket Inn in Freeport during the late 1980s to the mid 1990s. Theta was a perennial volunteer at the Maine Organic Farmers and Gardeners Association Fair, an avid kitchen gardener, a baker of our daily bread, and, not least of all, a brewer of excellent lager.

Theta was also a natural teacher, when both her daughters were of school age, she earned a second master’s degree, this one in education-exceptionality from the University of Southern Maine, and served for several years as the coordinator/facilitator of gifted and talented education in MSU 51, which included the towns of Jefferson, Whitefield, Chelsea, Somerville, and Palermo. She later helped found an experimental school in Gardiner, and she taught in both the Sabattus Elementary School and the Lincolnville Elementary School, teaching both middle school language arts and math. During this time, she also earned a certificate of advanced study from the University of Maine at Orono.

Theta was predeceased by her sisters, Elaine Stage, of San Diego, Calif., Gail Collins, of McCaysville, Ga., and Mary Parmenter, of South Royalton, Vt. She is survived by her husband, James Torbert, of Whitefield; their older daughter, Laura Rahe, of Hillsdale, Mich., and her husband Paul Rahe, along with their children Antonia, Francesca, Paul, and James; younger daughter, Alice Coyle of Whitefield and her children, Calvin, Lowell, and Silas, along with their father Rufus Percy, of Newcastle, and Alice’s partner Eric Friberg, of Pittston; in addition to nieces, nephews, and many grandchildren and great nephews and nieces.

Her husband expresses his heartfelt thanks for the support of family and friends, and especially for the compassionate and skilled care provided to Theta in her last months by the staff of MaineHealth Home Hospice Care, giving her a dignified and graceful exit from this life.

A notice of a celebration of her life will be sent to friends and family later.