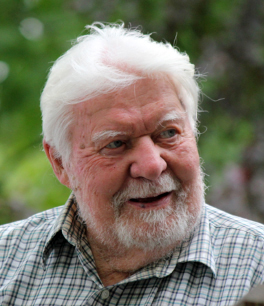 Born on March 15, 1918 in Jersey City, N.J. to the late Anna and George Manahan, he graduated from Lincoln High School and studied mechanical engineering at the Brooklyn Polytechnic Institute, leaving to join the Army in 1941. That same year, he married Josephine “Josie” Gerlach and, for 61 years, they shared a life, raising their two children in New Jersey and eventually retiring to Maine.

During World War II, Tom served as an Anti-Aircraft Intelligence Staff Officer at Camp Edwards in Massachusetts, then as an Officer in Charge, supervising civilian personnel and technicians at the U.S. Army T.C. Depot in Marietta, Penn. Following his military service, Tom worked at the International Railway Supply Company in New York City, beginning as an office boy and rising through the ranks to become president.

In 1958, Josie bought a piece of land on Damariscotta Lake. Over the course of five years, Tom built a cottage, by hand, with his son and family friends. In 1970, he and Josie moved their life north, to Jefferson and Rockland. Tom worked as the branch manager of the Bath Savings Institution and retired in 1978. He maintained a life-long fascination with the banking industry and was an early adopter of online trading.

Easygoing and laid back, Tom was never in a rush unless he was typing, which topped out at speeds of 110 words per minute on a manual typewriter – a record no one in his family has broken. He enjoyed photography and woodworking, could play music by ear, and sang in a barbershop quartet.

Following the death of his wife, Tom moved to Florida, where he lived with his partner of 13 years, Mildred “Betty” Davis. They recently celebrated her 100th birthday on a cruise with family to the Bahamas.

Into his late 90s, Tom continued to summer on Damariscotta Lake. He passed his passion for Maine onto his children and grandchildren, who will continue to enjoy the cottage and memories of “Papa” sailing his Puffin on a light breeze. His big laugh, twinkling blue eyes and ready sense of humor will be dearly missed.

A cremation will take place in Largo, Fla., followed by a family memorial service, later this summer.