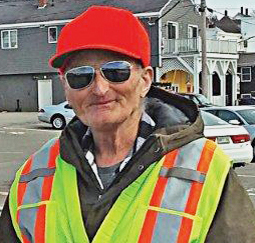 Vernon Stewart “Vern” Phillips, 77, passed away at his residence at Hodgdon Green in Damariscotta, on the morning of Sept. 23, 2019. Born on Dec. 8, 1941 (one day after the attack on Pearl Harbor) in Waltham, Mass., he was the beloved only child of George “Stewart” and Mildred Phillips.

While Vern did not go far in school, the Waltham Public Schools awarded Vern a Certificate of Achievement for a perfect record of attendance from September 1955 to June 1956. Vern had a special fondness for animals, especially his dog, Judy, and the family’s many cats.

As an adult, Vern moved to Bristol with his parents and could be seen walking the 6-1/2 miles from his home to town. He continually walked around town where he helped local businesses with mail pick-up and alerts to outdated flyers and posters. Intelligent and highly observant, Vern also helped fellow citizens with reminders of expired vehicle registrations, inspection stickers, and more. A day in the life of Vern usually included 14 or 15 miles of walking – rain or shine, blistering heat or bitter cold. Vern was unstoppable.

In July of 2014, he moved to Hodgdon Green in Damariscotta, where he spent the final years of his life, enjoying his Hodgdon Green family and his beloved Damariscotta. He also enjoyed a whole bunch of day trips to Brunswick, Portland, Thomaston and more, riding shotgun with his pal, Karen. Vern will always be remembered as the “Man who walked around town.” One resident called him the “Spirit of Damariscotta.”

Besides his parents, he was predeceased by his very good friend, Ruth Ives.

Vern is survived by the Keith Prentice family, including nine cousins; very close friends, Rob Gregory and his wife Sim – and his office staff, Julie Crider, Tina Gardner, Rose Prior and Andrea Krah; Karen Wales and her husband Walter; his Hodgdon Green family; as well as the entire town of Damariscotta and the surrounding towns who were a part of his daily walks. Vern’s daily presence will be sorely missed.

A funeral service to remember and celebrate Vern will be held at 11:30 a.m., on Friday, Sept. 27 at the Twin Villages Church, 40 Church St. in Damariscotta. He will be laid to rest privately with his parents in the Bristol Mills Cemetery.

Arrangements are under the direction and care of the Strong-Hancock Funeral Home, 612 Main St., Damariscotta. Condolences may be expressed by visiting StrongHancock.com.