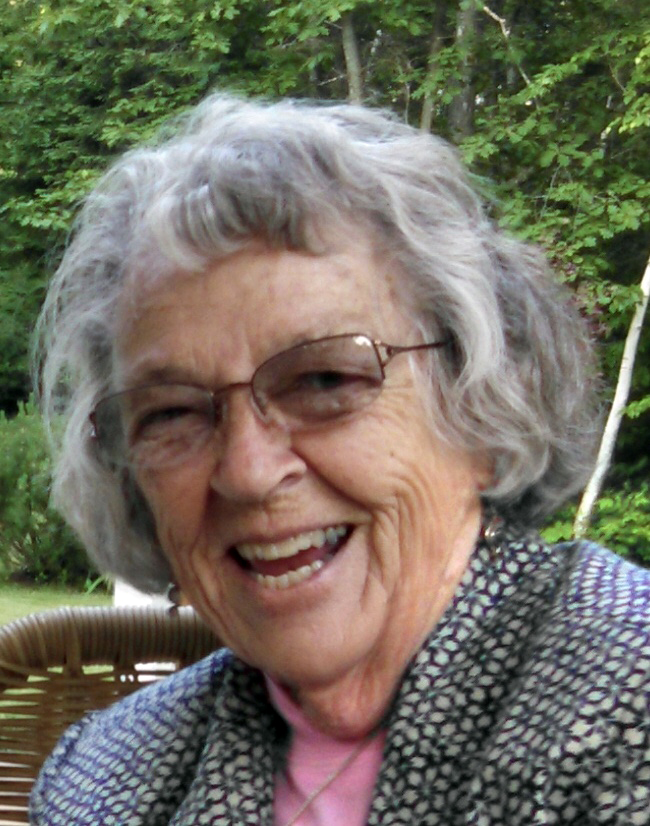 Ginny was born in Portland on Dec. 22, 1928, to Charles E. and Medora (Haskell) Stickney, the seventh of their eight children raised in the family’s beloved Portland home at 9 Hastings Street. In addition to her siblings and their spouses, Ginny was predeceased by her husband, Douglas “Gabby” Keniston Cooper; daughter, Jocelyn Cooper Stover; and many, many friends.

Ginny graduated from Deering High School and attended the University of Maine at Orono, earning a degree in business in 1950. While at college she met the love of her life whom she married in 1952. After short stints Rockland and New Jersey, they lived in Belfast before moving to Wiscasset in 1962, where Ginny and Doug raised five children and where their home was a treasured gathering place for all who dropped by, moved in, or found their way to the dinner table.

Ginny was a people person, first and foremost, with a magnetic personality. Singularly blessed with many talents, she enjoyed gardening, singing ditties, playing the piano, sewing, drawing, handwriting letters, and participating in town activities. She excelled at card games, hosting the Wiscasset Bridge Club in her home, and beating her daughters at “Spite and Malice.” She was most passionate about cooking on a grand scale; no matter how many she was cooking for, the more the merrier was her unwritten motto. Her domain was at home in the kitchen, and it is thought she owned every conceivable kitchen gadget or appliance. She relished feeding crowds including family, friends, hitchhikers, Doug’s business associates, and Wiscasset High School field hockey teams. Famous for her ever-available pies and Christmas cookies, she inspired her daughters and granddaughters to establish an annual Kooky Cooper Cookie Ladies weekend retreat, re-creating confections Ginny loved to make for the holidays and distributing to family and friends near and far.

One to take advantage of any opportunity to toodle, her family spent many a Sunday driving back roads to who knows where, abruptly stopping roadside when something caught her eye; picking blueberries and wildflowers were two of her favorites. Her children and grandchildren never knew where they would end up or when they would arrive home.

Ginny loved her pets, for dogs the larger the better. Her dog Tevia was thought to be part Newfoundland and part bear, and most recently, Guh Boi, her Maine Coon cat who appeared on her doorstep and provided years of company, joy, and comfort.

Ginny enjoyed a close connection with the Sebago Lakes region. As a child she summered at her family’s camp at the southern end of Sebago Lake. When the property was purchased by the Portland Water Company, the family relocated to Watchic Lake in Standish. For many years, Ginny would open the Watchic camp, “Tiger Lily Lodge,” in the spring and manage the comings and goings, as well as the feeding, of many generations of Stickney family and friends. Sunday chicken barbeques were a favorite, accompanied by pink lemonade mixed with grape juice, followed by Deering Ice Cream treats – the family-owned company.

Ginny truly lived life to the fullest. A genuine and open-hearted person, she is described as vibrant, one-of-a-kind, amazing, strong willed, ready to share a good laugh, and beloved by all fortunate to share time with her. Over many cups of coffee, dinners, and cocktails as the sun lowered over the yard arm, folks knew they could “drop in” and leave her company in better cheer.

As Ginny was instrumental in Wiscasset’s creation of a recreation center for youth from its earliest beginnings in the late 1960s, and housing the town’s first recreation director Richard Strudwick in her home, we are asking that in lieu of flowers, donations in Ginny’s honor be given to the “Cooper-DiPerri Scholarship Fund” to help provide low-income families, seniors, and youth access to all of the programs offered at the Wiscasset Parks & Recreation Department addressed to the Wiscasset Community Center, 242 Gardiner Road, Wiscasset, ME 04578.

A celebration of life will be held at 11 a.m. Saturday, Feb. 26, at the Wiscasset Community Center located at 242 Gardiner Road, Wiscasset.

Arrangements are in the care of Funeral Alternatives, 46 Bath Road, Brunswick. Condolences may be made online at funeralalternatives.net.