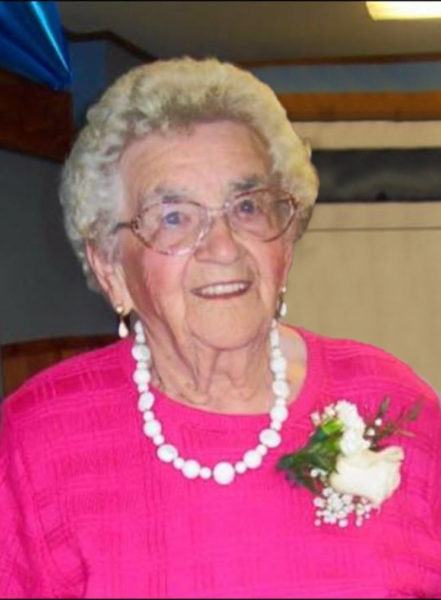 Born in Warren, Aug. 25, 1922, she was the daughter of Chester O. and Grace Lermond Wyllie. She attended local schools and graduated from Warren High School in 1939. She attended Colby College for a year and later graduated from Ballard Business School of Rockland in 1942. While a student at Ballard, she taught night school at that institution.

In 1942 Ginny began employment with the Office of Price Administration, where she worked until her marriage to Roger E. Teague in 1943. With her Air Force husband, Ginny moved to Smyrna, Tenn., where they lived until his honorable discharge.

Returning to Warren in 1944, she worked at the Warren Woolen Mill office for six years, during which time her daughter was born. After the close of the mill in 1952, she began working at Thomaston National Bank which later became Maine National Bank. Mr. Teague died in 1959.

In December 1967, she married Parker H. Spear. The couple moved to Portland, where Ginny continued with Maine National Bank until 1971. They returned home to Warren and Ginny again worked with Maine National in Thomaston, and then part-time with Damariscotta Bank & Trust. She retired after 50 years of banking in 1989.

She was an avid knitter and enjoyed crafts.

In addition to her parents and first husband Roger, Ginny was predeceased by her second husband, Parker Spear in 1989; daughter, Daphne J. Teague Wood in 1995; and brothers, Gerald Wyllie in 1929, and Alfred H. Wyllie in 1996.

Visiting hours will be held from 5-7 p.m., Fri., Feb. 10 at Burpee, Carpenter & Hutchins Funeral Home, 110 Limerock St., Rockland. A funeral service will be held at 1 p.m., Sat., Feb. 11 at Warren Baptist Church, Main Street. The Rev. Dr. Linwood Welch will officiate. Spring interment will be at Newcomb Cemetery in Warren.

To share a story or memory with Ginny’s family, please visit her book of memories at www.bchfh.com.