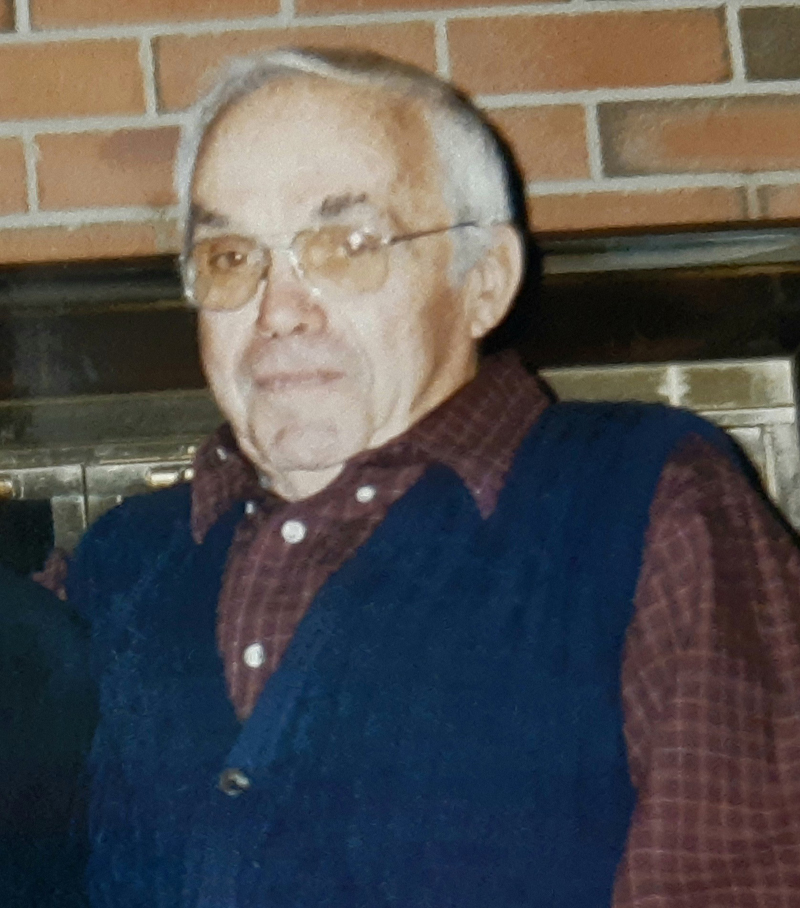 Surrounded by his loving wife of 72 years, and his three children, Wallace Prock died at home on the morning of Tuesday, Jan. 4, 2022. How fitting that he was with them as he serenely left this world, a life well-lived and loved, centered around home and family. Special thanks to Wendy Jackson of hospice for making this peaceful transition possible.

Wallace, born on March 7, 1930, was the oldest child of Alton and Dorothy (Jackson) Prock of Waldoboro. He attended Waldoboro schools; at his graduation from Waldoboro High School he marched with his classmate (and bride-to-be), Doris Winchenbach.

Doris and Wallace wed at the home of her parents in South Waldoboro on Aug. 28, 1949. Their life together was handcrafted with love and hard work. As they built their home in stages, they grew their family, their vegetable and flower gardens, fruit trees, and beautiful landscaping. Where Doris made magic in their kitchen and was a quilter among other things, Wallace was a skillful furniture and cabinet maker. Over the years they graced their homes, and those of family and friends, with topnotch quality works of art with practical purpose.

Working hard for his family, as well as working with his family, was the fabric of Wallace’s life. He and his brothers worked at Alton Prock and Sons. When their father died in a tragic plane crash in 1962, the company was in jeopardy. Fortunately, the boys were well-respected and two Rockland businessmen offered to help Wallace and his brothers develop a business for themselves. If it weren’t for Cliff Ladd and Christy Adams, there may never have been a Prock Marine Company. Blood, sweat and teamwork put them on the map. Even after retirement, the brothers visited the new office weekly to see their boys (and grandsons) at work.

Wallace stayed active at Rockland Marine, too, and was a former member of the O’Hara Corporation. He was a member of Masonic Lodge No. 135 for over 50 years. He was also a former member and trustee of the Orff’s Corner Community Association. Not only did Wallace work hard at Prock Marine and stay active in his community, he also worked hard to have fun! He loved camping, starting with tents and over the years ended up with a motor home.

Not only did he and Doris explore Maine, they also made their way to all 48 contiguous states. Although Wallace worked hard driving and maintaining his motor home, he was rewarded greatly with beautiful decor, restaurant-quality meals and superb tour director services by Doris. Their children and their families will confirm all this since they were invited on many trips to Disney World, etc. In all, Wallace and Doris traveled to all 50 states, but the USA borders didn’t confine them from also seeing a lot of Canada, Bermuda, the Caribbean, Fiji Islands, Australia, New Zealand, Ireland, England and France.

As busy as he was there was always time for Wallace’s passion – fishing. His best friend, Lincoln Orff, was often with him. In fact, their wives, Doris and Janice, were usually out on the boats, too. Together they enjoyed fishing trips to West Grand Lake, Cupsuptic Lake and Moosehead Lake. The Orffs (including Sandy, Claudia and Claudene) not only fished with the Procks, but they shared camping, traveling, and lots of fun times and happy memories.

Lincoln and Wallace would get away to Linc’s camp in West Forks for some hunting and fishing. They liked roughing it and enjoyed the outdoor life. In recent years, it was a bit more rustic than they preferred so Wallace would go “bird hunting” with Wayne by riding the back roads and once in awhile they’d flush one out! It was never about the hunting for Wallace, but he enjoyed the camaraderie and getting outdoors.

Wallace loved spending weekends at Wendy and Wayne’s Camp Comfort. He loved looking for moose, sitting by the fire, visiting with the neighbors when they dropped by and eating great food. Up until a few years ago, Doris and Wallace would join the “kids” and hop on the four-wheelers for a day trip on the rough and rustic trails.

In the fair weather months, Wallace’s heart was in Back Cove at the cottage. He loved to pilot the fishing trips along the coast. And he really loved relaxing with Arnold and the kids while Karon and Doris served up scrumptious meals. Everything tastes better at the cottage.

When Randy and Cindy lived in Orff’s Corner, Wallace played Santa by hooking up a “sleigh” filled with gifts to his snowmobile and delivering them, much to the boys’ delight. Randy and the boys loved ice fishing with him because he taught them the joy of being a fry cook on the ice… and to keep the perch for a good chowder.

And so it goes, the man of our happy memories… Wallace was predeceased by his brother, Ancil; his sister, Marie; his brothers-in law, Herb Paradise, Raymond Winslow, Robert Winchenbach, and Carl Winchenbach; and his best friend, Lincoln Orff.

Wallace is survived by his wife, Doris; daughter and son-in-law, Karon and Arnold Reed; son and daughter-in-law, Randy and Cindy Prock; daughter and son-in-law, Wendy and Wayne Northrup. He is survived by his grandchildren, Chad Reed and his wife, Jen (Ethan, Aaron and Anna); Daniel Prock and his wife, Heidy (Jamie and Dylan); Amanda Reed Flagg and her husband, Steve (Wyatt and Ellie); Forrest Prock and his wife, Liz (Tyler and Zachary); Brandon Northrup and his partner, Nicole Barter (Scarlett); and Kyle Northrup.

Due to COVID, the Prock family is privately celebrating Wallace’s life with a burial to follow at the Orff’s Corner Cemetery.

If you would also like to honor his memory, please consider making a donation to Orff’s Corner Cemetery Association, 669 Waldoboro Road, Jefferson, ME 04348.