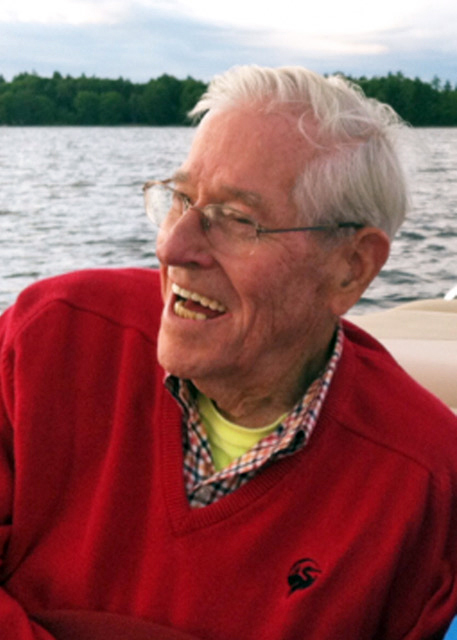 Gerry was born on April 22, 1930 in Englewood, N.J. He was the son of Watson Gerould Clark Jr. and Helen Mary Goodman of Tuxedo Park, N.Y.

Gerry grew up in Englewood, N.J., attended Storm King School in Cornwall, N.Y., and spent most of his summers working at the family farm, Woods Edge Dairy, on Martha’s Vineyard. He and his brother Bill were tasked with delivering milk to homes and stores on the island. His mom and dad hoped that they would not drink up all the profits before completing those deliveries! It was there that Gerry’s love of flying began as his mom, a military transport pilot, taught him how to fly.

Gerry graduated from Cornell University, where he was in the ROTC. He entered the military as an officer and pilot. He flew multi-engine aircraft and was a tactical reconnaissance flight commander during the Korean War. Following his military duty, he embarked on what became a long and successful career as a leader in the property and casualty insurance industry, where he was admired and well respected by his peers. He was a mentor to those around him, and often called upon to help tackle the most complex business challenges.

At the same time, Gerry met the love of his life, Gail McLeod of Tenafly, N.J. They were married in September of 1957. Gerry and Gail raised four children in Tenafly, where he was very active in the community, serving on numerous boards, to include the board of education and the Presbyterian church, as well as being deeply involved in their children’s various school and sports activities.

Second only to his love of family and friends was his love of their wonderful, lifelong home in Bremen, where they ultimately retired. Once again, his love of service to the community continued as he volunteered on the board of the Bremen Library, Pemaquid Watershed Association, and the Bremen Board of Appeals, to mention a few.

Gerry was a man of great strength and character. He epitomized our true purpose on Earth, to make the very most possible with our individual abilities and talents, and to have love and compassion for others. He taught us all the value and importance of having a positive attitude. He will be deeply missed and lovingly remembered.

A celebration of life for Gerry will be held in the spring.

If you would like to make a contribution in Gerry’s memory, he was an avid supporter of the Pemaquid Watershed Association, which is now part of the Coastal Rivers Conservation Trust, P.O. Box 333, Damariscotta, ME 04543.