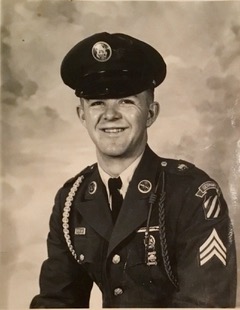 Wayne was born in Waldoboro on April 10, 1942, the oldest son of Malcolm and Maxine (Achorn) Little. He graduated from Waldoboro High School in 1960 and joined the U.S. Army in 1963. His brief but distinguished military career, during which he was awarded a Bronze Star, ended when he was seriously injured on May 14, 1966 in Vietnam.

Wayne loved the outdoors and became a Registered Maine Guide, guiding sports on bear hunts and moose hunts, and freshwater and saltwater fishing trips. He and his beloved Walker hound Skip spent autumn nights raccoon hunting until tragedy separated them. For many summers, he and Becky ran Moody’s Island Campground on Damariscotta Lake.

Wayne loved country and southern gospel music, playing guitar, and singing. He was the family champion at Scrabble and an avid cribbage player as well. He was always fixing or building something, and he grew an amazing vegetable garden year after year.

He is survived by his daughters and their families; and his siblings, Bruce Little, Linda Rogers, Lorraine Collamore, and David Little; as well their spouses and many nieces and nephews. Wayne was predeceased by his wife Rebecca; his son, Mark; and his brother, Warren Little.

A graveside service will be held at 11 a.m., Thursday, May 19 at Orff-Achorn Cemetery followed by a celebration of life gathering for both Wayne and Becky at the North Nobleboro Community Center.