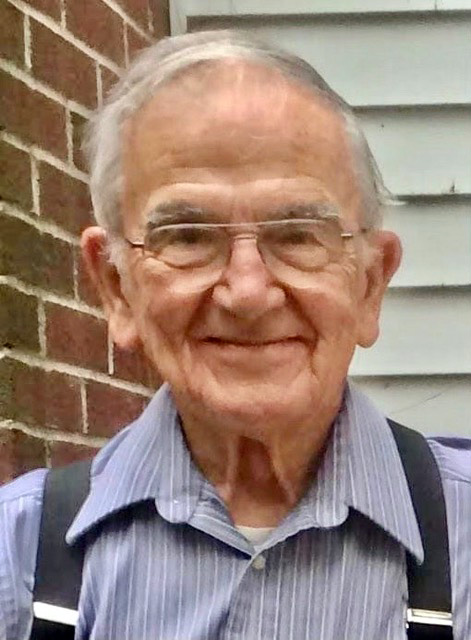 On Sept. 28, 2021, William “Bill” McCormick Robinson was blessed to die peacefully and with dignity at home, surrounded by love and with family by his side. He joins his wife of nearly 70 years, Sally, who had passed on May 26, 2020.

Bill was born in Fullerton, Calif., to William Lester Robinson and Mildred McCormick Robinson. In 1933, after Lester’s place of employment burned down, and so that Mildred could care for her sick mother, the family moved east to work on the McCormick family farm in Crawford County, Pa., leaving dear relatives in Anaheim, Calif. His parents survived the difficulties of the Depression era and eventually owned a farm in New Richmond, Pa.

As the only child, Bill was no stranger to hard work, yet he still found time for fun things in life like music, radio shows, sledding, grange events, and always the great outdoors. He developed a taste for nature’s bounty, recalling fresh persimmons and oranges in California at ages 3 and 4; and he always harvested troves of strawberries, peaches, cherries, pears and apples (and rhubarb, which had to be cooked first, darn) wherever he lived. He even went strawberry picking at age 91 (though he almost took up “residency in the field”), and he went apple picking on his 93rd birthday. Apples hand-peeled during fall football games and made into applesauce was a staple of his household and graced many church suppers through the year.

Because of not being able to be vaccinated for his first year of schooling due to a health issue, he started out homeschooled by Mildred who had at one time been a one-room schoolhouse schoolteacher. Young Bill was always a quick learner, so was soon reading incessantly. He later read every book in his school libraries and at age 16 he read the entire encyclopedia. Throughout his life he consumed several books each week of many genres, as well as a number of natural history and science periodicals, and to the chagrin of some, this literacy extended to compulsive (and sometimes competitive) punmanship. He was a graduate of Cambridge Springs High School.

Prior to graduating from Grove City College as a degreed chemist, he worked in testing and quality control at Cooper Bessemer in Grove City, Pa., to supplement scarce scholarship assistance. Following graduation, he briefly trained in Pensacola, Fla., for Navy fight training, before being released because of an over-abundance of servicemen in the military at that time.

There followed a long career of chemical and electrical engineering, culminating in work for General Electric that took him around the world later in his career. He worked first as a testing and additive development researcher at Kendall Refining Co., Bradford, Pa.; then as a metallurgist, quality and process engineer at Morse Chain Company in Ithaca, N.Y.; as a product development and application support manager at Cowles Chemical Company, Skaneateles Falls, N.Y.; and for nearly 35 years as a product development and process engineer for GE, Auburn, N.Y., where he worked with a research team pioneering new products and processes for the rapidly developing market of transistors, SCRs and semiconductor for computer chips for smart micro-devices. D

uring this time, he eventually traveled to and served as technical manager of production lines at factories in Ireland, Singapore, Malaysia, Hong Kong, Korea and Mexico. His last few professional years were spent working largely remotely as a consultant on those products at Powerex, Youngstown, Pa. He found profound appreciation for the ingenuity of his fellow Americans, as well as people of other backgrounds and cultures worldwide through his work.

Music was threaded through his life, whether whistling alone, or performing in instrumental or singing groups. It was in the choir at Grove City College that he met the chestnut-haired, hazel-eyed Sally Chittenden Deming, and said he “never looked back.” They were married in a small ceremony in her home in Elizabeth, N.J., in 1950. He taught himself guitar and loved folk music. Until very recently he and Sally were active singers in church choirs, and Bill participated in many barbershop groups, musical revues and theater musical performances (with a marked preference for Gilbert and Sullivan operettas).

During their 46 years in Skaneateles, N.Y., he and Sally raised their four children and were parent figures and grandparent figures to many. Bill was a beloved storyteller and dramatic reader, ranging from fairy tales and poetry to Tanglewood Tales and Just So Stories. While Sally was a den mother, Bill was a Cub and then Boy scoutmaster for many years. Bill also enjoyed games, and most school nights after homework was done, he might have been found testing them with a game of cribbage, poker, checkers or chess. On a snowy or rainy day, the family would enjoy a community effort on a puzzle. He certainly did his part taxiing his children to and from band, theater, and athletic practices, music lessons, and parades, along with attending matches, games and performances by the dozens.

He had an itch for travel, and every year after the family’s annual two-week camping trip to some of the east coast parks he would immediately begin to plan for the next year’s vacation trip. In 1966 he carried his two-week vacation over to ’67 so the family could have four weeks to camp to the west coast, including stopovers in many of our great nation’s national parks, before arriving in Anaheim, Calif., to visit relatives. Then after a day trip to Disneyland, the return included visits to Indian ruins and the Grand Canyon.

Subsequent trips revisited the Southwest, Florida, the Smokies and Nova Scotia. He would return to the Colorado River in 1975 for an amazing white water rafting trip down that Canyon with his daughter, Heather, chartered by his California cousin Kendall and piloted by Kendall’s sons. Later they spent two weeks each year at a cottage in Winter Harbor.

In 2002, he and Sally decided to relocate to Midcoast Maine to be closer to their daughter, Heather, and her family. Although they missed many very dear friends, it was a decision they never regretted. Here they made many new friends and never ceased to marvel at the beauty of the Midcoast area.

Bill’s strong faith and sense of respect for others was always evident in his actions. He was a man of science, discernment and commitment, and of faithful service to Christ’s call. He strived to make the world a better place for everyone in many different ways. He and Sally were active members at the many churches they attended, and during their 46 years at the United Methodist Church in Skaneateles, N.Y., and 18 at Bremen Union Church, they taught Sunday school, helped with youth groups, created newsletters; served as secretary, trustees and committee members; and provided leadership for charity, special projects and missions. In Bremen, all looked forward to Bill’s ginger cookies, applesauce or waffles after services and special events.

Bill is survived by a daughter, Heather Elowe of Nobleboro; and three sons, Chris (and Anita), of Portland, Ore.; Mark (and Roxanne) of Black River, N.Y.; and Dean (and Amanda) Fly Creek, N.Y.; and “daughter-of-the-heart,” Mary Blatz and husband Andy Tanguay, of Marcellus, N.Y.

There was so much he loved about life; he found leaving it to be very difficult. It was however apparent he also deeply missed many good friends, family and of course, his dear wife Sally, and so now he is reunited with them and in peace.

An August 2022 memorial service in Maine is planned.