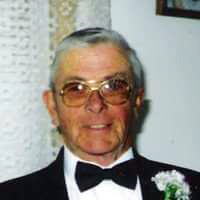 William H. Pierce, 87, of Nobleboro, passed away peacefully Nov. 9, after a short illness.

He was born Dec. 6, 1928 in Dorchester, Mass. to Harold and Dorothea (Hawksworth) Pierce.

He grew up in the Dorchester area attending local schools. He attended Boston Latin School for one year before dropping out to go to work. He followed work to Northern Maine, where he worked for the Bangor and Aroostook Railroad. He worked a variety of jobs including welding at Bath Iron Works, delivering bread for Pepperidge Farm and Calderwood, delivering milk for Round Top Dairy, was a custodian at Miller School and many years working for Hunt Brothers, Marriner Lumber and eventually, Hancock Lumber. He retired from the Colby & Gale service station.

He married Jeanette (Morton) in 1958 and together they made their home on the West Neck Road where they raised their children.

Bill enjoyed building things and making toy boxes and desks for his grandchildren. He also made full-size well houses and small-scale lighthouses. He moved onto small well houses which he would give away. Each item he made was special as no two were the same. He also had a great sense of humor and was a known practical joker. He always had a joke or story to tell.

He was involved in coaching his children’s baseball and hockey teams and spent many years as a scout master for local area Boy Scouts.

Above all else, Bill was a hard worker who didn’t care how hard or dirty the job was; he did it without complaint. He tried to instill this work ethic in his family along with, “never let your car get below a quarter of a tank” and “always be 15 minutes early no matter what”.

He is predeceased by his parents; sister, Louanne Silaber; and grandson, Dwight Monti.

He is survived by his wife of 58 years, Jeanette; sons, Terry and wife Barb of Bridgewater, and Lynn and wife Nancy of Jefferson, and William and wife Linda of South Bristol; daughter, Carol and husband John Small of Warren; grandchildren, Elizabeth Pierce of Waldoboro, Sarah and husband Danny Lane of Nobleboro, Melissa and husband Lored Asllani of Wooster, Mass., Tara and husband Dirk McCrum of Mars Hill, William and wife Christina Pierce of Fitzwilliam, N.H., Drew and wife Abby Pierce of Bangor, Shari Pierce of South Bristol, and Richard and wife Molly Pierce of Waterville; great-grandchildren, William, Brenden, Isabella, Austin, Victoria, Annabelle, Kylie, Ariana, Oliver, #10 due in two weeks, and #11 due in March 2017.

Service will be at 2 p.m., Fri., Nov. 18 at the Word of Life Church, 41 Old Route 1, in Waldoboro with Pastor Tim Connolly officiating, with a reception to follow. Burial will be private.

In lieu of flowers, donations may be made to Nobleboro Fire and Rescue, c/o Nobleboro Town Office, 192 US Highway 1, Nobleboro, ME 04555.