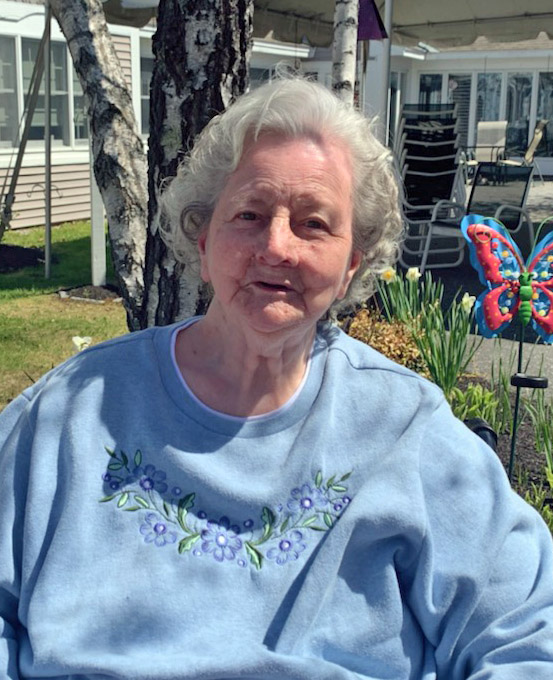 Winona B. Johnson, 86, passed away peacefully with her loving daughter by her side on March 10, 2021 at Cove’s Edge in Damariscotta. Winona was born April 10, 1934 in Waldoboro to Roland G. Miller and Evelyn M. (Smith) Miller. Winona grew up on Clary Hill in Union and attended local schools.

Winona married Jesse J. Johnson on Jan. 25, 1955. She had her hands full as a homemaker with five children. Winona was always busy as a devoted mother and wife.

Winona was a very kind and loving soul. She always looked forward to having company. She enjoyed sitting at the kitchen table having coffee and just visiting. With five kids, she did lots of sewing and mending of clothes. She liked doing word search books and listening to country music (sometimes she listened to Elvis with her daughter Arlene). Winnie enjoyed going for walks. Many times she was accompanied by her daughter Marie or her sister-in-law, Barbara.

Winnie also had some special recipes. Everyone loved Winnie’s baked beans, bread-and-butter pickles, blueberry pies, old-fashioned cinnamon rolls, and blueberry upside-down cake, but best of all her “Miracle Whip” chocolate salad dressing cake. All her children looked forward to that cake on their birthdays.

Winona is survived by her daughter, Marie C. Johnson Pierce of Waldoboro; son-in-law, Arthur S. Pierce III of Phippsburg; grandsons, Robert A. Johnson Jr., Justin J. Johnson and their families, all of Minnesota, and Larry Reed and family of Waldoboro; great-grandchildren, Jordan Johnson, Lillian Johnson, Cheri Johnson; and one great-great-grandchild, Jaxson Johnson, all of Minnesota. She is also survived by three sisters, Brenda Jackson and husband Ronnie of South Thomaston, Sylvia Hart and husband David of Virginia, and Janet Cunningham of Dresden; two sisters-in-law, Ruth Higgins, and Dolly Goff and husband Richard of New Hampshire; along with many nieces, nephews, and many friends.

A walk-through visitation will take place on Friday, March 19 at 1 p.m., followed by a funeral service at 2 p.m. at Hall Funeral Home, 949 Main St., Waldoboro. Rev. Robert Dorr will officiate. Social distancing and mask requirements will be observed.